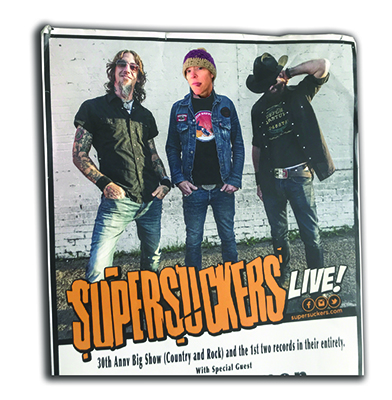 It’s a 9 o’clock show – just a few beers and home in bed by 11, I told myself. Do it for Eddie. What’s the worst that could happen?

This is the mental jujitsu I used when trying to convince myself to leave the house on a recent Friday night. Horrifyingly lame, I know. But when you get to be a woman of my, ahem, maturity, life begins to become a series of trade-offs. Crowded bar and drunken idiots or warm couch and cuddly dog? Sleep and productive Saturday or semi-coma followed by a day of cold sweats and self-loathing?

Anyway, since it was one of my favorite rock ’n’ roll bands, the Supersuckers, and the lead singer, Eddie Spaghetti (pretty sure not his real name) had just recovered from throat cancer, I decided it was the least I could do. After all, if Eddie had just kicked cancer’s ass, the least I could do is get off mine.

So there I was, mid-dance-floor, enjoying Eddie in all his glory, cradling my near-empty PBR and thinking I should probably head back for a refill. Plus, the “country set” (all two songs of it) had just ended, and I knew things had the propensity to get rowdy. But as of yet, no moshing activity had been detected, and I figured I was far enough from the fray to be safe. I mean, this wasn’t my first trip around the mosh pit, I grew up in the ’80s after all – I saw the Cure live. It’s not like this bar fly was born yesterd ... .

And that’s when it hit. What, I’m not exactly sure. The band had just launched into a hard-core number when something – a well-placed elbow? Shoulder? Brass knuckles? Lead numchucks? – landed squarely in my face.

I tasted the telltale metallic sting of blood and thought, not only what an amazingly precise hit it was, but that it was gonna leave a mark. I immediately did a tongue check to make sure all my teeth were intact – score! – and scanned the crowd for the perpetrator. Not sure what I had planned on doing if I had spied him – bleed on him? But he had been swallowed back up into the dark abyss of pogo-ing bodies.

By now, the shock had worn off enough for me to assess that I had a split lip, and yep, I’m a bleeder. (Believe it or not, it was my first punch in the face, so I was not sure what to expect.) In a scene not unlike a Monty Python skit, blood squirted from the gaping flesh wound and ran down my face, making it appear much worse than it really was. I found my date (my husband, who was pleasantly enjoying himself in the wings up until now) and announced I should probably seek medical attention. Or at least an ice pack.

I made a bloody trek to the bar in search of ice. Unfortunately, the little green cock-
tail napkin they handed it to me in did little in the way of blotting and just sort of
stuck to the coagulating blood on my face. Meanwhile, the melting cubes mixed with
the blood, turning the stream into a gruesome red torrent more akin to a scene from
“The Shining” (you know, the one with the elevator doors.)

At this point, the hemorrhaging showed no signs of abating, and I got panicky. And yes, a little pissed. It’s one thing to get cold-cocked by some stupid frat boy in the mosh pit during the actual act of moshing. But, it’s another thing to be standing there, innocently minding your own appendages, and be taken out. Whatever happened to the good old days when pit casualties were given a helping hand and hoisted back up? Heck, just buy me a beer and hold my hair while I bleed.

No such luck. As the blood began to pool at my feet, I hastily threw the futile cocktail cubes down and headed for the door before I bled out on the bar-room floor. (Sorry, bartender and clean-up crew – but what would they tell my kids? I saw your mommy? Alas I digress, that’s a punk song for another day.)

After a restless night of sleep, the bleeding had stopped for the most part by the following morning. The wound had scabbed over nicely, leaving me with a lisp and a lower lip like the Goodyear Blimp, which made it painfully awkward to eat or drink. I tried to look on the bright side. For example, women pay lots of money to get their lips injected to look like mine. And, I’m pretty sure it worked to my advantage in intimidating the other team when I coached hockey that day (it also looked super badass in the team photos a few days later.)

Plus, the irony that I was sucker punched at a show by the Supersuckers was not lost on me. Even better, black lips turn into blue, purple and red lips in a painfully slow process, meaning I got to retell the story over and over again at the grocery store, gym, hockey rink, work, bank, lift line and post office.

Finally, I decided to just post it on social media, since the whole world already seemed to know anyway, to clear any misconceptions. Responses ranged from indignant, “That’s the problem with kids these days, no pit etiquette!” to highly sympathetic, “OMG. I can’t stop laughing.”

In fact, the only one who didn’t seem to get the memo was the teen boy, who emerged from his boy cave a few days later and very tactfully asked – as teen boys are wont to do – “Mom! What happened to your face?”

When I explained that I got hit at a concert, his eyes flew open with a mix of confusion, horror and disbelief. After all, I’m sure it was hard for him to fathom that a total stranger would physically harm a peaceful bystander, let alone his dear mother.

“Wait,” he stammered, no doubt trying to process the shameful deed. I braced for the barrage of questions, perhaps before launching into a lecture on the platitudes of pit etiquette and kids these days. But instead, all I got was another sucker punch, one I admittedly stepped right into.

"You went to a concert?" he asked incredulously.