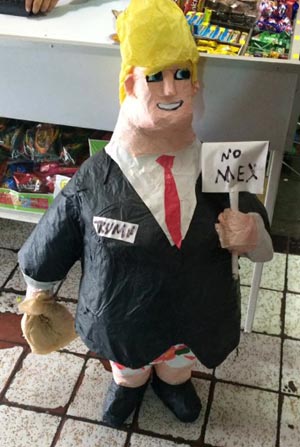 Do you know those friends who are your same age but always seem to be one step ahead in the realm of maturity and wisdom? My buddy Dave is one of those guys, and the first person I ever ventured down to Mexico with. Once after returning from travels abroad he told me, “Every time I leave the United States, I always come back grateful that I live here.”

He first told me that in the George W Bush years when we were fresh out of college. It was my belief that society was a failure, a sham. America was a warmonger, and I wanted nothing to do with its economy. In those days, I
wanted nothing more out of life than to climb and live in a tent; to eat rice, beans, cheese and avocados and sip cheap beer in the nighttime. Mexico provided that in abundance. But upon return, like Dave had predicted, I was grateful to be an American.

After a few more trips, always climbing near Monterrey, one of the biggest cities in Mexico, I was usually grateful to return home. But I also came to the realization that we could learn a thing or two from our neighbors, and vice versa. There’s things I love about Mexico, and things that bother me about it. Same thing for Estados Unidos.

I recently returned from my seventh trip to the Monterrey area. One of the reasons I’ve visited so often is that one of my great college friends Mark lives there for half of the year. We went there together in 2006 – it was Mark’s first time in Mexico and he didn’t speak a word of Spanish. He stood out like a sore thumb, a tall blondie, a guero with big ole bugged out blue eyes.

Flash forward to 2018, Mark is married to a Mexican woman named Norma and they have a 4-year-old daughter named Isabella. The story in between those 12 years is one that I don’t have the space for. But Mark fell in love, learned Spanish and made Monterrey his home for the winter months.

I failed in my rejection of society – stupid Barack Obama made me believe in America again – and as an adult, my lifestyle is relatively mainstream middle class, Durango style anyway.

For my Republican readers, if I actually have any other than my father, I’m being sarcastic. I did truly appreciate Obama but by the time he was president, I desired some upward mobility and had grown to appreciate things like a reliable vehicle, a good hot shower, and a comfortable place to rest my head at night. In short, I became a capitalist, not a very good one, but one all the same.

And when Obama was president, at least in the early years, I was broke as hell, and the economy was flailing and failing. Once, when I first moved to Durango, a restaurant where I was applying for a job asked me for a resume – for a dish-washing position! When you’re broke and unemployed, it doesn’t matter who the damned president is, you’re just thinking about your next meal. I didn’t even get that dishwashing gig, despite the fact that I’m the best dishwasher this side of the Mississippi.

Anyhoo, what I love about Mexico, at least this area, is its slow pace of life; no one seems to be in much of a hurry about anything. In the rural areas where we climb, people smile and wave. Taco stands appear out of nowhere. The great art of doing next to nothing is valued and executed. Life seems to be appreciated for what it is.

People are also executed here. Just a few years ago, 17 people from (and affiliated with) the band Kombo Kolombia were beheaded and dumped into a well. Was there justice brought forth? Of course not, this is Mexico we’re talking about; the cartels run the country, not the government. (Google Kombo Kolombia to see what I’m talking about.)

One of Mark’s friends, Joel, has been advocating for climbing access for El Diente, a world-class limestone zone in Mexico. The area is right next to a ritzy neighborhood. (While there’s millions of poor people in Monterrey, there’s also a small percentage of very wealthy people there.) Joel and Mark have been stopped from climbing there by armed guards (the police). While Joel has done his research and determined that the land is public, the area is still closed off from climbing because people with money and power want it that way. And unlike the United States where we have groups like the Access Fund, Joel has very little resources or precedent for this fight. He’s also feared for his life as he fights simply for access to public lands.

In these Trump years, I’ve had another existential crisis about our home country. I’ve accepted and studied the conditions that allowed him to rise to power. I’ve also been more motivated to get involved socially and politically, in my own small way. And I know I’m one of the millions of Americans on which Trump has had this effect.

And lo and behold, that is what makes America great. We can peacefully assemble and organize and create change. Sure our government is corrupt, but we do have something that at least resembles a democracy. To Mexico’s credit, Americans are the ones consuming all those drugs that make their cartels so strong.

I guess I just opened up a can of worms (where does that phrase come from anyway?) that can’t easily be resolved. But in the Trump era, it’s good to travel abroad and see the world for yourself. People are good and bad everywhere.

Plus, one of the best parts about Mexico is that I didn’t see one damned Trump bumper sticker. However, I did manage to pick up a Trump pin?ata for a few hundred pesos, and finally I’ll have a little something to take my anger out on – although I was interrogated by Border Patrol agents upon my return.

And when I take that first swing, I’ll finally have something from Mexico, in America, that makes both countries great.

Luke Mehall is the author of American Climber and the publisher of The Climbing Zine. He can be contacted at luke@climbingzine.com.