The best a man can get

I’m almost afraid to admit this, living in such an outdoorsy community as we do. But here goes: I have never shaved in the woods.

Well, OK; that’s not entirely true. I shaved in the woods once, in that I happened to be in the woods when I shaved. But I can’t count it as a legitimate shave-in-the-woods experience because it was during summer camp, and it was an emotional disaster.

That week, I had already failed at lathing a wooden log into a lamp because no camp counselor taught me how to use a lathe, safely or otherwise. I’d already cried in the tent at night from being friendless and homesick and at-
tempted to pass off my sniffles as allergies, which the other 9 to 13-year-old boys totally bought.

So when we woke up in the deep wilderness, and I was faced with another whole day of camp before I could take care of this pressing stubble in the familiar confines of my own home, I wandered off to shave far away from prying eyes and critical peers. 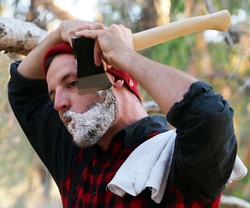 But no one, camp counselors or parents or PBS television shows, had taught me anything about shaving in the woods. The only aftershave I could find was oak leaves and pine needles. When I wandered back to camp, I’m certain it was evident that this had not been my closest, smoothest shave ever.

I honestly had not dredged up this experience for 15 years. What brought the episode to mind was my recent decision to really rough it, dispersed-camping style. I camp a lot, but always in places with pre-made fire pits and neighbors to complain about. This was the first time I’d gone camping where, if I died chopping fire-wood, the bears would make a Jackson Pollock canvas out of me before anyone knew I was missing. But the likelihood of that scenario didn’t bother me as much as the raging, freshly unrepressed possibility that I might need to shave at some point during the weekend.

However, I wondered: isn’t shaving in the woods the epitome of capable, self-assured, resourceful and rugged manhood? Wasn’t this – self-therapy alert! – a prime opportunity for me to claim the share of manliness denied me ever since that summer camp for thoroughly unemployable camp counselors? Was this not a chance for me to gain greater access to the Durango umwelt, where even women shave in the woods, thereby throwing doubt on this whole “manliness and manhood” theory?

Rather than answering those tough questions before departing, I acquiesced to the pressure from my dog, who was giving me the look of “Can we GO already?” So we went, and I decided that I would shave in the woods if it became necessary. Which was a remarkably big “if.”

You see, if there’s not reliable and dedicated shaving facilities, my body goes into Travel Mode. It’s like my self-regulating physical processes suspend themselves in a state of full summer-camp-traumatization (look, doc, a breakthrough!) and my beard just ... stops growing. I swear, it holds back all that hair for a massive growth spurt when I return home. Rudimentary facilities are just fine, but I’ve certainly never dug a hole in the ground to shave in.

As with many personal demons, I had to face this one down to over-come its taxing impact on my existence. So, naturally, I put it off (with a lot of help from Travel Mode) until the last morning camping. Things could go either way at that point. I figured I could do without a shave until after one last hike, but this was a Big Moment in Life. Dagummit, I had to do this. I set off to find a nice clearing in a copse, asked my dog to keep his distance, and...

... without going into all the details...

I did it. I shaved in the woods. And it didn’t traumatize me at all. In fact, the birds were trumpeting, the breeze cooled my cheeks, and the sun came out to light up the entire forest. Whether or not shaving in the woods for the first time is a rite of manhood, I felt like a man. Like Man, archetypal and indomitable. One with Nature. Steward of all the light touches.

I buried my shavings and set off to return to civilization, free of doubt and a spring in my step. But can such changes really be permanent? Am I altered, as all heroes are, by my quest? I’m no licensed self-therapist, but the answer seems to me as obvious as bears shaving in the woods.