The day the music died 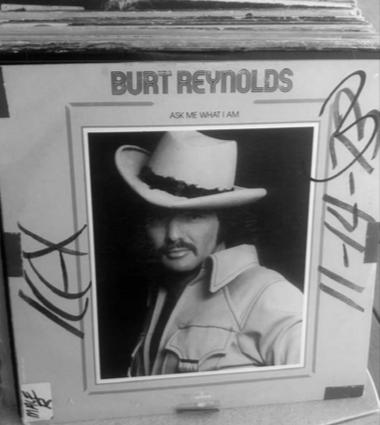 With the recent passing of the legendary star of screen and cinema, Burt Reynolds, I decided to dig out my old LP of the Moustachioed One’s 1973 country-lite, Bobby Goldsboro-produced “Ask Me What I Am.” It’s a mediocre album, rather half-hearted and overly sentimental – but it is a Burt Reynolds LP, and that makes it special. I purchased it for 99 cents at a record store in Seattle back in 2008 when the band I was in was playing at a music festival. (We technically opened up for the band, Helmet, but only because we went on very early on a day when Helmet happened to be headlining). I had never really listened to the album in its entirety until I heard about Burt’s death. So it begs the question of why I kept it around for 10 years, enduring multiple moves and several strained backs.

Well, why did I keep it? Besides being a rather comical item in-and-of-itself, I also felt an attachment to it. There’s a story behind it that transcends Reynolds and schlocky ’70s country. I’m not a pathological horder, but I do get overly attached to things. I prefer my Burt in LP form rather than streaming him on Youtube, but after recently moving, I was reminded anew that having a large music collection is a burdensome situation. I think of those people with their little smartphones and teeny speakers they hook them up to, and I get a little jealous.

That said, I recently took part in a sad event for the Durango community, the closing of Southwest Sound. I see the store closing as a direct result of the streaming/downloading trend. I worked there from 2015 until it closed in July, going full time for the last two months of its existence. During my time there, customers would often casually remind us of why business wasn’t as good as it used to be. There were the people who would cluelessly ask “Does anyone still buy CDs?” while standing in front of a huge rack of CDs, or the folks who would look around at new releases and then say aloud that they would buy it on Amazon or stream it. When we announced we were closing, there were the people who came in with a look of dismay, asked us why we were closing (often in an angry and accusatory manner)  and then leave without buying anything. But insensitive people, (who, rest assured, we heavily mocked after they left), there was the myriad amazing customers who expressed sadness, gratitude and love – then purchased something.

Two weeks after the closure, I began a large change of my own: moving out of my apartment of two years and into a two-month housesit gig with all my belongings temporarily in a garage. A big part of the process has been packing up my large music collection and sorting through the chaos. I began buying music when I was 15, and probably have upwards of 1,000 LPs and 500 CDs, 280 of which are in a large CD wallet (a purchase I made the last time I moved to make my life a little easier). I also have countless burnt CDs and ridiculous amounts of cassette  tapes. I still have my original two cassette storage drawers, both with faux-wood paneling and containing my original tape purchases spanning the years 1992-94.

Sometimes, I think it might be easier to ditch the drawers and put all those precious cassettes in a special box, but then I think, “I’ve already moved these things across the country numerous times over the course of 24 years, why get rid of them now?”

Indeed, it is this sort of attitude that allows me to accumulate things so easily, but those early cassette tapes are special to me and I still listen to many of them (even that copy of Rush’s 1989 album “Presto” got a rare listen last year. It’s decent – not as good as “Roll the Bones” but better than “Hold Your Fire.”) I see myself 20 years down the road, still with those cassette drawers, a lovely reminder of the good ol’ days amidst what will likely be some hellish dystopian society we can only barely imagine right now.

Amidst all this personal change, I’ve been reflecting on the closure of Southwest Sound, and those three years spent selling music. I recently paid a visit to the Sunday flea market at the fairgrounds, where Southwest Sound’s owner Robert Stapleton has a stall to sell off the CDs and LPs we were left with at the end. He hadn’t had much luck in selling off those sad remainders. I flipped through the CDs and found a lot of familiar titles, many of which had been in the store from the last decade. We had a nice chat, catching up on life since the closing, this time as friends rather than as employer/employee. He was in the music business since he was a teen working at Tower Records in L.A. and so he feels the loss far more than I do. (Robert has some amazing stories about the shows he saw on the Sunset Strip back in the early ’70s – he really needs to write them down.)

But damned if I don’t feel the loss, too. I feel it more and more with each passing day.

The day after Southwest Sound closed, Robert, myself and my co-worker Clay, had the unenviable task of disassembling things, uncasing CDs and taking them out of the system, separating the returnable ones from the unreturnable, and much more. It was quite depressing at first, but there was one thing I wasn’t expecting. For the first time ever, it felt like we were just three guys hanging out and listening to music, not trying to sell anything. And in the end, that’s the most important thing, really.

I could go on about the death of physical media and its consequences, but for my own part, I will always prefer listening to something that I have a physical copy of – even if it makes moving a real chore and contributes to my constant battle with clutter. All the weirdo LPs, CDs and cassettes I’ve accumulated over the years add meaning to my life. I may never listen to that Telly Savalas LP, but it’s there, and I know it will be of use some day. Indeed, my collection of David Hasselhoff music (two CDs and two LPs) has brought me great joy. In fact, if I ever get married, I will insist that the Hoff’s song, “Flying on the Wings of Tenderness” be played at the reception. If anyone is interested in a used Joey Lawrence CD, however, please contact me.