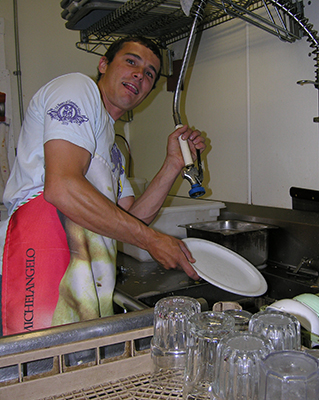 If what goes around comes around, I know the exact reason why I was a dishwasher for such a long time.

I was 16 years old and it was closing time at the Old Country Buffet. Restaurants can be good places to find mentorship, but this was not one of those places. I was young, dumb and working in a restaurant in the mall; my first job.

We were in the dish pit. The pile of dishes seemed insurmountable, and I came up with an idea. “Let’s just get rid of the dishes,” I told my co-worker, who was also my best friend. “I bet we can pull out that panel on the ceiling and just throw them up there.”

So we did. And with that, I was cursed to be a dishwasher, for a long time.

I hopped around a bit, too, as a busboy, food runner and line cook, but I always found my way back to dishwashing. I committed simple sins, especially back in Illinois as a teen-ager: stealing beer, smoking weed on shift, and buying drugs off my fellow co-workers.

Nothing too criminal, although one time after completing my ritual of standing on the toilet seat, taking a hit off my one hitter and blowing the smoke into the fan, I cracked the toilet. I didn’t realize what I’d done until I came back later and noticed the base of the toilet had a huge crack in it and was leaking. I was so stoned I didn’t realize I was actually the one who had broken it! I reported it to my manager, and slowly as I sobered up, I put together the logic.

The manager, who could have had a role in Office Space, (“you wanna see my flair!”) launched a full investigation and called the police. So, one morning, I was questioned by the police in my hometown for the case of the cracked toilet. I denied everything. I’ve never actually confessed this, but I think the statute of limitations has probably run out, and the business has long been gone.

When I arrived out West in the late ’90s, I found a perfect place that paired with the experience of my previous debauchery. It was a basic burger and steak joint, and they needed a dishwasher. (All restaurants everywhere always need a dishwasher.)

The owner was a pitiful alcoholic who said he was a recovering alcoholic but was actually still an alcoholic. He was from the Midwest as well, and buying the restaurant seemed to be his form of self-reinvention, something I’d later learn was quite popular “out West.”

I didn’t really have any form of reinvention in mind, but in my heart, I think I just wanted to become a decent human being. Someone who could do a good job, get a paycheck and put the teen-age years me behind me.

It took a couple more years – bouncing from line cook to burrito roller back to dishwasher – until I finally found myself on my way to becoming a decent human being. Gone were the days of petty criminal behavior: I was a climber and a writer, and I called myself the best damned dishwasher this side of the Mississippi.

The reason I came back to dishwashing was that I wanted to avoid the never-ending drama of the food service industry. I had one job and that was to make sure the dishes were clean. I started calling myself the “zen dishwasher” – with good weed and the right tunes, I was unstoppable. I’d do my honest work for an honest wage and go home soaking wet. I didn’t care.

Mentorship found me in Crested Butte at a joint called Donita’s, which some of you may have heard of. Although Donita was long gone, the place still bared her name.

Tom became my mentor. He was a trained chef who said that French cuisine was the closest to his heart. The fact that he was working at a Tex-Mex place seemed to be a cruel twist of fate. Tom had made some decisions in his life he wasn’t proud of, and he was open about it. He had a son he never saw. So maybe he saw something in me; a chance to mold a young man into a better man.

A stoned dishwasher with a college education is an OK thing in your twenties; add another 20 years, and it can be sad. Tom was blunt: find something else, follow your writing and don’t end up like me.

Now there’s an important distinction to make here: the restaurants I was working in weren’t fine dining. They were tourist traps. And I didn’t go to culinary school. I was just biding time, working for a few months while I lived in a tent, so I could save money and go somewhere else and live in a tent there. Anthony Bourdain I was not.

Last year, I finally left the food industry. Before leaving, I had another important mentor here in Durango: Tim, the owner of Zia Taqueria. I worked at Zia’s for six years and did all the jobs from dishwasher to prep cook to manager on duty. I got to know the Durango community well, and can probably remember what you ordered if you were a regular. Like Tom, Tim knew my dreams and aspirations in the writing world and challenged me to turn those visions into reality.

It’s unfathomable how many dishes I scrubbed over the years. There were some dark times – working at a vegan joint in Salt Lake City one winter while living in a basement without heat – and it was hard getting dates with the many beautiful waitresses I’ve worked with over the years. There’s just something about a man covered in wet, food slop that interferes with the pheromones. Luckily, I ended up with a former waitress anyway, the love of my life, who I’m thankful didn’t meet me in the stoned haze that was my twenties.

There are things we do when we’re young that don’t make a bit of sense to our adult selves. I was a reckless kid, who luckily had good parents and eventually found a way to be surrounded by good people. And a lot of that journey happened washing the dishes of America, with more than one misstep along the way.

Luke Mehall is the author of American Climber and the publisher of The Climbing Zine. His fifth book, The Desert, will be released in December. More of his work can be read at climbingzine.com. He can be contacted at luke@climbingzine.com.