The ghost of a smile

I shut off my engine at the gas pump, but before I could even open the truck door a man who looked like he’d been living close to the knuckle stepped up to my open window and rested his hands on the frame. Peering intently into my truck, and at me, he asked if I had any spare change.

The man’s eyes widened in disbelieve, then his lips broadened into a suspicious grin.

“What branch of the service?”
“28 years in the trenches of public education.”

He started laughing, as if it had been a long time coming. Then he moved away from the window, bending at the waist, holding his stomach, laughing. I reached into my pocket, but he’d wandered away, wiping the corners of his eyes with his sleeve, dismissing any offer of money with a wave of his hand.

“Come back,” I shouted after him, but he’d set his sails for a convenience store across the street, and I watched him go.

Maybe it was ridiculous to compare what teachers do every day to the service of our military personnel. I know the business of putting one’s life on the line is a much taller order than trying to drill a platoon of hormones and teach them the weight of their education can be carried like survival gear into adulthood, but still, I wondered. My visitor laughed like he was on fire. Who knows how precise the trajectory of a truth must be to have an impact. His laugh, so genuine and infectious, made me smile too. 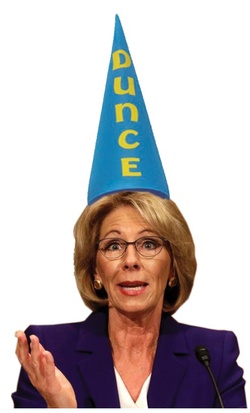 School teachers are perhaps not smiling these days, but it’s not because they’ve been having a bad week. It’s more like a few bad centuries. Consider this from the Littleton School Committee in Littleton, Mass., circa 1849: “God seems to have made woman peculiarly suited to guide and develop the infant mind, and it seems ... very poor policy to pay a man $20 or $22 dollars a month, for teaching children the ABCs, when a female could do the work more successfully at one third of the price.”

An early example of economic restructuring. Sadly, it’s hardly educational reform. And we are still leaning against that wobbly pillar of wisdom, believing it should never cost more money to deliver a quality education.

The greatest portion of our nation’s budget goes to the military. My gas station visitor could have told anyone that a general commands from military experience. I would like to set the record straight with this addendum: one who sets policy and direction for America’s teachers is a civilian general, so to speak, in the war on ignorance.

My depression flourished as our politicians saw fit to approve the nomination of a woman who has absolutely no experience in public education to oversee our educational troops. She attended private schools, never studied pedagogy, and has not been employed for a single day in the service of any public school system.

But she’s a billionaire. Working teachers must be climbing into their foxholes at night and dreaming she’ll put her bankroll to use by purchasing the classroom supplies they have been scrambling to find.

Fiscal matters aside, what’s even more depressing involves the dismal showing of graduates from colleges who are choosing to enter the teaching profession. Colorado has seen six consecutive years where recruitment numbers have fallen, an overall 24 percent decline. If Denver schools are “feeling the pinch,” then rural schools are on the verge of hemorrhaging. New Mexico, according to the nonprofit Learning Policy Institute, reported the second-highest rate of teacher turnover in 2013, topped only by Arizona.

Two in five Utah teachers leave the Beehive State within five years, but Utah’s Legislature thinks it solved the problem: a new rule allows schools to hire people who have no teacher training. No combat duty whatsoever.

Someone needs to stand beside General Betsy DeVos’ car window and explain how public schools will not be served by sending taxpayers’ money to the private sector. That amounts to little more than passing the ammunition our soldiers need over to a band of unaffiliated mercenaries. Vouchers for parents to send their children to private schools that offer religious programs without any mandated curriculum, and where testing or accountability is always optional, hardly seems like a choice our children will need to succeed in a diversified world.

We know what the battlefield costs. In the Vietnam War, 47,434 soldiers died, and another 153,000 suffered injuries. In the war on ignorance, the casualties loiter like ghosts, showing for roll call in the next generation