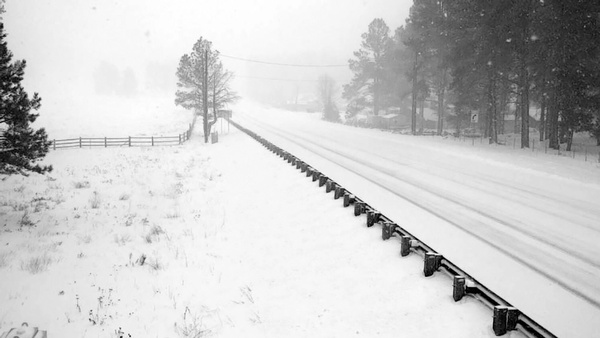 Time is supposedly the most precious thing we have, but when an early March storm dumped 3 feet of snow on Flagstaff, Ariz., we had more time than we could fully appreciate. Brought to a full stop at the north entrance ramp to I-17 on the outskirts of Sedona, we had no way to return to our Flagstaff hotel room.

We’d traveled from Cortez on completely dry roads, and except for strong winds that blew across the highway, sending a circus of tumbleweeds bouncing like balloons off the front of our car, we enjoyed the trip. The car’s grille looked like it had grown a beard, a motorized Rip Van Winkle ready for a Southwestern nap as we checked into our Flagstaff room. I pulled it all loose and watched it disappear across the parking lot.

Then, with only a light rain-snow mix falling the next day and a full day ahead of us before returning home, we decided on a short trip to Sedona. With the interstate open and the plows active, I maintained a reasonable, slightly slower speed, even as a string of vehicles sped past us.

What we couldn’t believe when we exited the interstate, heading into Sedona, was that only a fog hung over the landscape and not a flake of snow anywhere on the ground. A few soft flakes eventually swirled like static in the air around us while we visited a shop or two. Then around noon the sky literally fell, a stiff wind driving thick, white flakes into our faces as we made our way back to the car, as if the fabled vortexes of Sedona suddenly turned mischievous and visible. Back to the freeway we drove, only to confront orange highway department barrels and flashing lights on an ADOT truck blocking the entrance ramp.

I parked on the shoulder and walked over to the truck. The driver slid his window open.

“Is the interstate closed?”

“How long before it opens again?”

Behind me, an obviously impatient driver approached, and after hearing the same explanation, proposed he just might give the interstate a try anyway, only to be warned that the cops would stop him and hit him with a huge fine. He cursed both the worker and his luck as he walked back to his car. I walked back to ours.

Our belongings were still in Flagstaff. Computers. Clothes. Toiletries. Snacks. A bottle of wine, everything we might need if we were forced into an unscheduled overnight stay in Sedona. I glanced at my watch. Only half past high noon, so we settled into our saddles on the frontier of interstate Arizona.

We had plenty of entertainment, for we were right beside the entrance ramp, a spot with a perfect view as, one by one, more and more vehicles formed a Möbius strip behind us, parking in a loop until every available space, even under the interstate bridge, was packed bumper to bumper.

A precarious convoy of semi-trucks exiting the freeway approached the bottom of the down-ramp. Too large to join us, they created their own blockade – not as any organized protest movement but as an unhappy, obstructed chain of commerce stuck along a busy north-south free,way corridor. Meanwhile the weather staged its own mandate against travel, imposing a stay-at-home order that in hindsight seemed more reasonable as the snow came down. None of us were happy being caught in the wrong place for a long time, but shouting at the DOT worker stuck with crowd-management duty, who must’ve wished he’d pulled a longer straw?

As the afternoon plowed on, every semi forced off the northbound freeway had to maneuver a tight U-turn under the bridge, then up the ramp just to find enough room for the rig along the southbound freeway shoulder. And those drivers parked under the bridge – instead of moving out of the semi’s way – just cringed and looked the other way as each semi that couldn’t quite make a clean U-turn backed up, repositioned, and likely cursed their encounter with the obstacle of an uncompromising human brain.

We spent five hours at the head of the waiting line while the wind kicked up a floating wall of indignant snowflakes. When the interstate eventually reopened, I felt like we’d been chosen to lead a parade as the highway patrolman directed traffic back onto the entrance ramp. But instead of beeping my horn and waving out the window, I just drove white-knuckled and quietly thankful we had all been loosed from our frustration, a meteorological stay-at-home mandate no one could refuse.