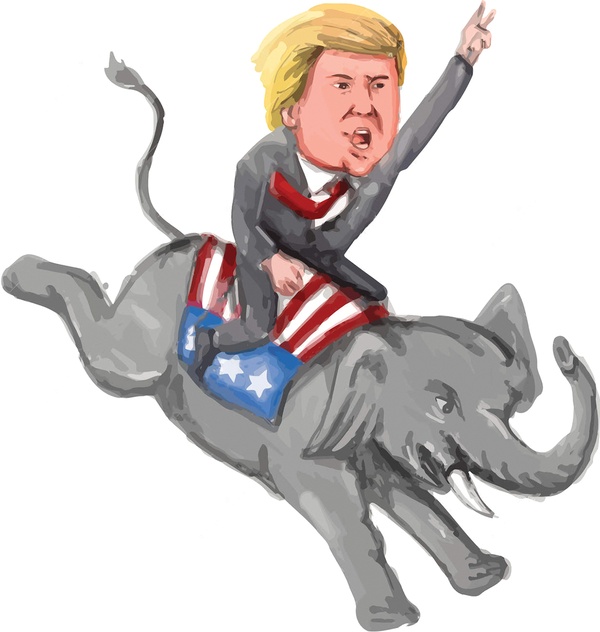 It’s the obvious problem we all can see but refuse to talk about. This time it’s a Republican-branded beast, depicted as an elephant since 1874. Civil War soldiers used the expression of “seeing the elephant” to mean they had seen combat, until the political cartoonist Thomas Nast used an elephant among a menagerie of other animals to signify the Republican vote. The image stuck. Since then the elephant hasn’t left the room.

Populist movements – often personality driven – tend to lose their spark once that personality has left the stage. I hope this turns out to be the case for our nation’s recent experiment with authoritarian rule. That experience has surely been a failure, but occasionally a movement lingers after the big top gets packed away. We may have inherited the herd.

There’s no better place to start discussing a conspicuous problem than with an investigation of the Jan. 6 attack on our nation’s Capitol. Many who listened to the Senate impeachment trial say they have heard enough. But what took place Jan. 6 was orchestrated by a personality and a populist movement, and many of the actors in the drama held and continue to hold positions of power in the government alongside the Constitution they claim to represent.

Recently, conservatives in the Senate blocked the House’s attempt to form a 911-style investigation into the attack, forcing the House to approve a smaller committee by a narrow House majority with only two Republicans voting in favor. Obstruction, I’m afraid, will be the plan. It’s obvious many conservatives don’t want to talk about Jan. 6. They don’t want anybody to talk about it. They want the country to “move on,” stop blaming and pointing the finger. Stop worrying about it. So let me do just that, move on and try to figure out why that elephant won’t leave the room.

According to NPR, data compiled by the Gun Violence Archive reported 189 people killed with 516 (including two police officers) injured in shootings over the 4th of July weekend. The shootings overwhelmingly took place in Chicago, Texas, Virginia and Ohio. And that’s just the casual holiday slaughter disclosure, not the mass shootings we’ve grown so accustomed to hearing about. The problem with gun violence is, as they say, “in our face,” but gun legislation has been consistently defeated. Proposed laws in a dozen red states seek to nullify any federal gun-control measures, allowing local police to stop enforcing existing federal laws. Texas, for example, just passed an open-carry gun law that takes effect Sept. 1, allowing Texans to carry handguns without any license or even proof of basic training.

Also, let me mention our nation’s health, because over a half million Americans have died from contracting the COVID virus. CDC guidelines have been asking citizens for more than a year to wear a mask for personal and public safety, as well as urging Americans to choose vaccination as a viable means of limiting the virus spread. These guidelines, based on an ever-changing and emerging science, have been maligned and stirred into a pot of conspiracy soup, fed to the populists as if the government is trying to control, but not protect them. It makes sense that COVID cases are rising in much of our country, but those rates are doubling in states where vaccinations have been refused, the same places where public health recommendations for safety have been ignored or inconvenient mandates quickly stripped away.

I went to the food market last week to buy a loaf of bread. My preferred brand has been sporadically out of stock, but the delivery man’s rolling carts full of new bakery items stood beside the shelves, and he was filling in the empty spaces. I thanked him for resupplying my favorite. He stood up and looked at me as if explaining to a loafer that if the Democrats would stop giving people money, America would have been back to work long ago. I wanted to remind him that stimulus payments were also approved by Republicans when they held a majority, some of those dollars even before the pandemic. Then, of course, there are permanent tax breaks received by wealthy corporations, which aren’t exactly complaining about their handouts. Jobs will always be important, but working for peanuts is only popular with elephants, creatures that supposedly never forget. It’s just their counterparts who don’t like to be reminded.

Not to mention names, but maybe it’s time for the irrelevant to get down from the elephant. You know, the one who thinks he’s still the ringleader of this political circus. Ringling Bros. and Barnum & Bailey Circus mercifully retired its elephant acts in 2016.

Is it just a coincidence this one showed up about that same time in Washington, D.C.?