The lie of the land 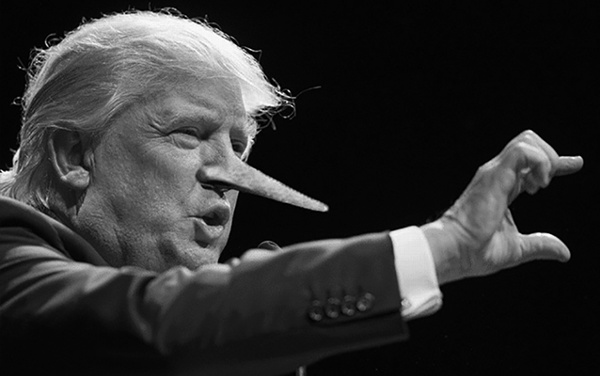 “Truth is the most valuable thing we have. Let us economize it.” – Mark Twain

An ancient marble mask sculpted during the Roman Empire’s heyday hangs on a church wall outside Rome’s Santa Maria in Cosmedin. Archaeologists aren’t sure about the mask’s original location or purpose, but since the 13th century this church has served as its custodian. Formally known as La Bocca Della Verita? (the Mouth of Truth), it attracts a curious population. Tourists wait in line for the chance to test the oracle, to place one hand inside its open mouth. Legend claims a liar will lose that hand.

What did I do when my turn arrived? Naturally, I stuck my hand into the orifice – not knowing what to expect – then pulled it free, intact, still flexible enough to reach into my pocket and deposit a few coins in the donation box.

Catching a liar by offering a cosmic guillotine may seem unreliable in determining the purity of a conscience, but does placing a hand on the Bible and swearing an oath do more? Any observant tourist in line at the Mouth of Truth might have noticed I used my left hand, the one I don’t depend on – just in case.

Every day the news reports our collective failures, people we once admired caught in a labyrinth of lies. We used to wash a child’s mouth out with soap for fibbing, hoping that by instilling virtue at a young age we set a lifetime course. But even a child won’t readily admit to a lie, repeatedly denying the act, eventually wearing down the interrogator. Oh, isn’t that cute, the parent thinks, all while trying to maintain a stern expression.

Stealth arrives with experience. Children grow older, and they cleverly camouflage their lies. If by some grace a stretcher-of-truths matures and achieves a measure of respectability, he or she sometimes wears that position of power like a disguise. I could mention one big fat liar to serve as a prime example, but we know who I’m talking about, mostly because we also know ourselves.

M & W Healy’s 1915 book on lying puts it this way: “All pathological liars have a purpose, i.e., to decorate their own person, to tell something interesting, and an ego motive is always present. They all lie about something they wish to possess or be.”

Modern experts suggest we try not to focus on any of the unreliable predictors when trying to tell if a person is lying. Don’t expect to see a protruding Pinocchio nose, dysfunctional eye contact, or even those pearly beads of sweat that supposedly pop up like an uncontrollable truth serum on a wrinkled brow. Pathological liars tend to be more sophisticated than that.

Between the innocent white lies and the universally dishonorable ones lurk the “half truths.” Political ads, campaigns, and reaction news story headlines use these hybrids to deliberately mislead the listener. The phrase “alternative facts” meets this standard, as in the trade story about how Japan drops bowling balls on American cars to test their safety. The truth is, they don’t, but Press Secretary Sarah Sanders in defending her boss’ fabrication said it “illustrates the creative ways some countries are able to keep American goods out of their markets.” She wouldn’t admit the story was a lie, but offered an alternative truth to distract us, hoping to make the lie sound more credible.

Research also finds the more a person lies, the easier it gets, and the lie – remember, not the nose – often grows. A 2010 paper published in Human Communication Research surveyed 1,000 Americans, asking them to report how many lies they told in a 24-hour period. Only 40 percent of respondents even admitted telling a lie. Truth may have turned into a matter of semantics, a persistent and petty quibbling over who’s standing on the higher moral ground.

Rudy Giuliani claimed while being interviewed on “Meet the Press” “truth isn’t truth,” a comment that prompted his interviewer, Chuck Todd, to laugh and nearly fall out of his chair. Giuliani went on to justify his statement, explaining that contradictory statements are two different versions of the truth, as if both were equally credible depending on your sympathies and loyalties. In today’s political climate, perhaps Giuliani is right, and dishonesty isn’t dishonesty, and perjury isn’t perjury. We can even amend the Constitution to allow governing by the unpopular vote.

I laughed when comedian John Oliver on his show “Last Week Tonight” joked “the only thing that feels better than lying to someone is lying to someone then regaining their trust, then lying to them again.” At first I thought what he said amounted to a joke, but now I’m not so sure. If we hold these lies to be self-evident, are we also endowed with certain inherent and inalienable wrongs? It’s beginning to sound all too plausible.