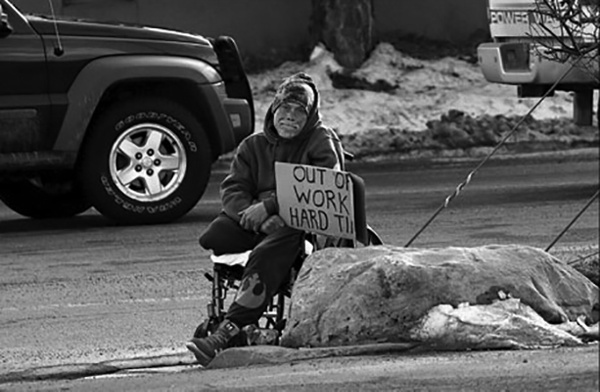 “What are you willing to give? What are you not willing to give?” These are the first two items on my 7-year-old son’s questionnaire that he distributed to his neighborhood friends, in an effort to help the homeless population of Durango. At the time, I chuckled about his ingenuity, reflecting on how smart it is to explore the depths of donators’ pockets before agreeing upon a donation. It was my brother, however, who drew my attention to the deeper layers of these questions and it is my answers to them that have haunted me since.

Here are the things that I have been able to give to Durango’s homeless: a few dollars to whomever I see asking; a two-person tent and camp stove to a toothless woman in the WalMart parking lot; an old backpack, filled with 5-gallon baggies of personal hygiene supplies; T-shirts and socks; a big jar of change that was just sitting on my dresser at home; some Subway gift cards; and a few minutes of my time to listen and engage.

In December 2017, the city of Durango allocated $33,000 to hire an advocate to work for the benefit of the Durango homeless population. The idea was to have this position filled early in 2018. The position has never been filled, and the idea was dropped in the middle of the year when the fires broke out. Since then, the homeless people have shuffled around from a camp west of Durango, to Escalante Middle School, to near Manna, to the base of Hogsback. The idea for a permanent home next to the Dog Park was nixed due to uranium deposits in the area. In November, the homeless population again set up camp west of town, but have since been told to leave by officials, but no alternative options have been given.

Most recently, the ACLU and the National Law Center on Homelessness have stepped in to draw attention to the harsh treatment of Durango’s homeless population. These groups state that the most basic step is establishing a permanent place for homeless residents to set up camp and stay any time of day, while working on a more permanent solution. It is unfortunate that the oversight of outside entities has been a motivating factor in the care of our most vulnerable population.

Nighttime temperatures in Durango have been plummeting to the single digits, and I am painfully aware that my ability to sit here on my couch, in a heated home, is the result not so much of my hard work, but luck. Mine isn’t so much a story of pulling one’s self up by her bootstraps, but rather the inheritance of some pretty sturdy boots. In this light, my heart hurts for those who are not so fortunate.

Once, when I was driving through Bodo Park, I saw a woman and a man hitchhiking. My mind fast-forwarded through all the logical reasons I should not pick them up, three kids in the car, a bunch of gear in the
back. As I passed them, the woman threw up her arms and said, “Oh come on, sister!” All those reasons melted away, and the more prevalent thought was, “She’s right. She is my sister.”

I drove this woman and her son into town. They were not homeless, but with a rental outside of town, no car and jobs in town, they were closer to the edge than I am. The woman lamented the fact that the trolley now costs $1 to ride each way, saying there are many people who can’t afford to do this every day. She talked about how wealthy people were flocking to our little town and saying things like, “There is a real problem with homelessness here. (The city of Durango) needs to do something about it.” She said, “That’s the real problem. It’s not that they need to do some- thing about it. It’s that we do.”

I am fortunate to have always had a roof over my head, 15 of those roofs here in Durango. Like many of us who live here, whether it be in the protection of a house or at the mercy of the elements, we agree there is no place like our Animas River valley. While the full name of the Animas River is Rio de las Animas Perdidas, we call the river and the valley “life.” All lives are valuable and every human deserves respect and compassion.

My solution isn’t grand. It doesn’t pave the wave for the reformation of an entire paradigm that sets people up to fall after having once slipped. I don’t attempt to break the homeless population into smaller ones based on who has chosen this lifestyle vs. those who need support to get out of it. I don’t rate the worth of a being on his or her level of substance abuse or psychological state. I don’t know how a city whose needs for improvement outnumber the dollars in the budget can fund a long-term solution. I just urge anyone who has read this story to honor and validate the humanity in every person you encounter. We can come together to discuss a more permanent, non-prohibitive shelter for Durango’s homeless, and in the meantime, provide an outdoor camping option that works for all members of the community. We owe it to each other, in this time of immense worldly suffering, to do at least this.