The salt of the earth
Adventures, and misadventures, in gentleman farming 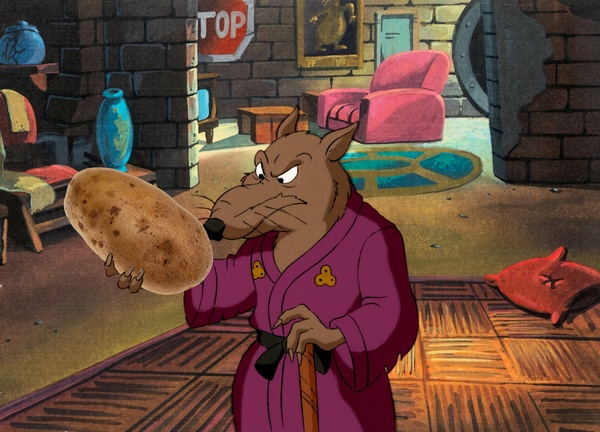 Hey kids! Let’s talk about plant sex. Namely, how my plants are not having any.

This topic is my chance to run a correction for a piece I wrote earlier this summer – or, factoring in 2020 time conversion – approximately 17 ages ago. I blamed my faulty gardening efforts on rabbits. I was wrong to do so. I needed to blame them on both rabbits AND pack rats.

Previously, I had a single mental image for pack rats, and I now realize that image was Splinter, the sensei sewer rat from Teenage Mutant Ninja Turtles. Splinter is not a pack rat. He simply leads a pack of teen-age mutant ninja turtles and does not clear cut my sunflowers. They (pack rats, not ninja turtles) would be much easier to hate if they appeared more gnarly, like Splinter, even if he is a good guy. Or, if they straight-up looked like hantavirus.

Instead, they carried what little garden I had into my pickup’s engine compartment, laid out a bedroom on the engine block, then turned around and rented it on Craigslist for $1,200/month. (No utilities included, naturally. And certainly no cats. Or owls.) And, most tragic of all, they looked like picture-book adventurers while doing it.

I could not stand idly by, however, and allow their fuzzy little faces to decimate my labor and my crops, such as they were. I also could not stand to kill them and their fuzzy little faces. (See above, re: picture-book adventurers.) So I trapped them and drove them across state lines, and each time I thought I had taken care of the lot, the next brood hatched and we began again. At least something was procreating in my garden.

And while I focused on relocating the rats, the rabbits ate whatever plants were left.

That’s not entirely fair to say. The rabbits and the rats neither one dug up my potatoes. They ate all the potato greens and the potato flowers that made it that far – but not the taters themselves.

All told, I suppose I grew the most gourmet $100 baby potatoes. Each of them was more petite than the smallest originally planted potato. They fit in my hand like Yahtzee dice. This sum total of my garden’s output equates to many weeks of groceries, which for my part would also not require manual labor. So I made damn sure to enjoy them properly. I fried up some butter, diced a grocery-store onion, tossed in the potatoes, and promptly lost sight of them in there.

I ate the buttered onions anyway – at $100 a pop, I was going to enjoy those taters whether I tasted them or not. And the experience inspired me to create a new fad diet based entirely on eating what your garden didn’t grow. In the dawn of agricultural societies, such as West Virginia in the time of my great-grandparents, this diet was called Death. But that’s not true anymore, thanks to convenience stores.

No, this diet borrows a bit from all the others. No vegetables means no carbs, a la Atkins. Not eating at all borrows from intermittent fasting. And, with no scientists in my household to verify my claims, I can dub this diet the PF Flyers of the digestive tract. Try turning 10 pounds of potatoes into 10 ounces, and YOU TOO can run faster, jump higher, lose weight, add muscle, grow back hair you want, shed hair you don’t want, fly in your dreams, smell better, and have your own inconvenient dietary restriction to fit in with everyone else!

The best part about this diet is the absolute freedom to eat whatever calories you can get your hands on, because it’s better than starving. Ice cream’s fair game. So are chips and salsa, and cappuccinos, and chewing gum, and anything your heart desires. At least until civilization as we know it crashes like my garden. In which case, come on over to my house. I’ve got some rather plump rats.