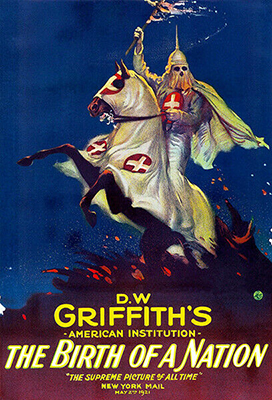 Regrettably, this is an actual poster from an actual movie, which was credited with ushering in the second wave of the KKK in the 1920s.

“When I was growing up, we had a Klu Klux Klan in Bayfield,” my mom said.

“Lots of folks joined. Your grandfather was a member.”

In the stunned silence that followed she added, “It was mostly a social club.” I found a list from the Bayfield Klu Klux Klan online. August, 1926. There was my grandfather’s name. Oh, Grampa.

Think racial tension is an urban issue? Both Bayfield and Durango had active chapters of the Klu Klux Klan (*with activities in Mancos and members in Cortez) in the 1920s. They marched, intimidated, wrote hate mail and burned crosses. Their members were hard-working men and women, mostly Northern European, mostly pioneer stock, generational Americans. Their targets? Their neighbors who didn’t happen to be “American” enough.

The original Klan formed after the Civil War in the South. By the 20th century it had all but disappeared. In 1915 after release of the racist film, “Birth of a Nation,” the Klan experienced a resurgence. By the 1920s, Klan chapters had spread throughout the United States. They were especially virulent in Colorado. In 1925 – while disavowing that they were a political party – the Klan managed to elect the governor of Colorado, the mayor and the police chief of Denver, a U.S. Senator and numerous state representatives and judges. This new Klan championed white Protestants who supported “100% Americanism.” Their main targets were Catholics, Jews and immigrants. Their underlying message was white supremacy.

In addition to Catholics and Jews, the Klan in La Plata County targeted “Mexicans” (anyone of Latino background, no matter how many generations their families had lived here); bootleggers; the “foreign born;” and lawlessness in general. It was sworn to protect the sanctity of women. The Durango Klansman – the local Klan publication – reported that on the June 6, 1925, presentation of Durango’s local charter, hundreds of flag-bearing Klansmen and Klanswoman, proud Americans, stood among “three huge fiery crosses” in reverential silence. No evidence of “thugs and lawbreakers” could be found.  An onlooker “would not have seen a slinking foreign-born bootlegger, gambler, wop or redneck in the crowd.”

The Klan in rural communities represented an opportunity for social interaction. Members cast themselves as a fraternal organization and sponsored, picnics, rodeos, car races and holiday events. But along with the fun came the Klan’s message. The increasing urbanization of America along with the collapse of the family farm, the flaunting of Prohibition and the liberalization of society – especially the roles of women as personified by the “flapper” – was threatening rural residents. The Klan portrayed cities as cesspools of Romanism, lawlessness and immorality. They held themselves to be the one true way back to some Golden Past, when everything was better. This divisiveness played well among rural Americans who saw their way of life eroding.

As the Klan grew, it promoted doing business only with other Klan members. Secret signs were employed to signify Klan membership. One was putting thumb and little finger in a pocket leaving the 3 middle fingers exposed, which stood for “KKK.”

A sampling of the Bayfield Klan membership showed the majority with a “common” education (not graduating from high school.) Farming and labor were the main occupations, and few claimed a strong religious affiliation, which contrasted with the Klan’s avid support of Protestantism.

The Klan was not violent in La Plata County. Threats and intimidation were more its style. Crosses were burned at Sacred Heart Catholic Church and in Italian and Mexican neighborhoods. Internment services were disrupted by riding horses through the cemetery. Catholic shop keepers were intimidated and their customers harassed. Threatening letters were sent to targets. At Christmas, a large cross was burned on Smelter Mountain.

In 1925, David C. Stephenson, a national Klan leader in Indiana, was convicted of the kidnapping, rape, torture and murder of a young white woman. The lurid details of his imprisonment and assault of his victim along with his subsequent outing of many Indiana elected officials that were in the Klan’s pocket, turned the Klan narrative of law-abiding probity on its head. Repulsed by his crimes and his revelations, Klan membership plummeted. In the wake of the scandal, the Klan across America collapsed.

La Plata County Klan activities faded into history. In the 1980s, a box of records from the Bayfield chapter was found in a Bayfield business. Much of what we know of its activities were gleaned from these records.  These papers are now at the Center for Southwest Studies at Fort Lewis College. The records for the Durango Klan have never been found.

Ultimately, the second wave of the Klan in the 1920s tapped into a fear of being marginalized, a conviction that unwanted change was sweeping through society leaving many behind. A longing for the “good old days” and “old time religion” ran rampant through the Klan. A reaffirmation of long-held beliefs that were vanishing was the bedrock of the movement. Blaming Catholics and Jews as agents of this change threatening their world seems illogical now, but their religions and the fact that they were different was enough to scapegoat them.

The Klan’s beliefs in the 1920s form striking parallels with the 2020 political climate. Today’s radical Right has been characterized as predominately white males, under educated and blue collar who see their way of life being threatened by “others,” be they immigrants, blacks or liberals. Changes in social mores such as those in the LGBTQ movement threaten long-held beliefs. Charges of police brutality rock their sense of security. In a rapidly changing world, they are falling further behind, which is the fear that drives all the others. The Klan feared change in the 1920s. Today, the Right has coopted that fear and magnified it.

The Klu Klux Klan still operates in Colorado though it has returned to targeting minorities as the root of society’s ills instead of Catholics and Jews. Nineteen other hate groups have been identified in Colorado as well. With armed demonstrators clashing with peaceful protesters, the denial of equal rights championed by Black Lives Matter and the ongoing fear of Latino immigration, it is hard to not see today as a Third Wave of Klan-inspired intolerance and fear. America is land of the free for some. For others, the struggle continues.

Are we doomed to repeat an ugly chapter in American history?