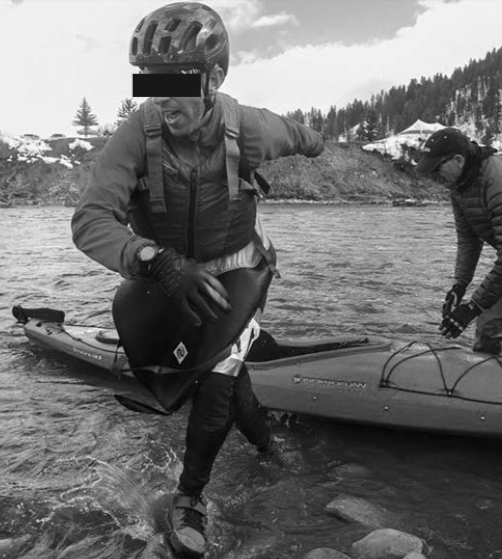 It’s the most wonderful time of year for sports fans – when professional baseball, basketball and hockey all coalesce into a dizzying array of nonstop televised offerings. Of course, here in the mountains, where most folks don’t own TVs let alone the satellite package to deliver more than snowy reruns of “Murder She Wrote,” sporty types get excited in the spring for a different reason. It’s the magical time of year when one can carve high-country corn by morning, float the river by afternoon and get in some time on the crag or singletrack by evening. Yes, I’m talking about the elusive yet highly regarded three-sport day. The crown jewel of mountain machismo, an “11” on the recreation rad-o-meter, the feather in your sweat-stained trucker cap.

Sure, many of us may be familiar with the two-sport day, some of us even knocking them out on a regular basis without so much as getting a hair out of place, raising the suspicions of the boss or having to change sports bras. But the three-sporter is only for the truly hard-core, or those lucky enough to have bomber knees, no regular job to speak of and very understanding significant others (or better yet, none). That’s because there’s no friends on a three-sport day (also known as “3SD.” Don’t worry if people have no idea what you’re talking about when you use this term. It just shows you’re in the know and they’re not.)

Of course, 3SDs don’t just happen by accident. Careful planning, training and preparation go into mastering the 3SD. Only the strong and masochistic survive. What follows is a step-by-step guide to upping your game and having the best 3SD ever.

The night before: If we’ve said it before, we’ll say it again: hydration is key. But then again, so is carboloading. We see no reason not to combine the two with a warm-up jaunt down to the friendly neighborhood brewatorium. Just remember, late-night nachos don’t count as dinner, and when you begin to skip the lime and just shoot the tequila straight, out of someone else’s glass, it’s time to go home.

The next morning: Up and at ‘em. Triple-sporters don’t get that way sleeping until noon or lounging around in their jammies all day like a Kardashian. It’s best to wake up at the crack of dawn, or at least when your parched throat is as dry and cracked as that nacho cheese dried to your shirt. Head to the kitchen, where you should proceed to pound copious amounts of coffee (again – hydration!) and crank the Velvet Rut for audio inspiration and commiseration. Decide that it’s probably too late to grab fresh corn, which has likely turned to grits by now, and hop on your bike instead. Don’t worry about breakfast – coffee is the most important meal of the day.

Sport No. 1: Greedily guzzle water bottle within first 10 minutes like a beached flounder. Start to feel somewhat human again, maybe even bordering on normal. Come home, somewhat amazed that you survived and didn’t crash once, and inhale greasy breakfast (which at this point is technically classified as lunch.) Pass out on patio chair under guise of a quick “recharge of batteries” (watch the sock tan lines!)

Sport No. 2: Still slightly groggy, it’s time to wake up with a bracing slap in the face with ice-cold Animas River water. Except the river has turned an unsightly shade of liquid ashtray, and the sky is threatening rain and haboob-like conditions. Feel secretly relieved when paddling partner texts to cancel, reminding oneself that the river will still be there tomorrow. It’s OK to accept that you’re a fair-weathered paddler – there’s something to be said about self-preservation. Which brings up the next vital step in 3SD success ...

Flexibility: It’s important, when in pursuit of a 3SD, to keep your options open and fluid. For example, there are lots of things that constitute “sport,” just look at the Olympics (curling, anyone?) A spin around the block on your longboard or maybe some backyard target practice – both of which require precise hand-eye coordination, balance and the ability to stand for long periods of time – are perfectly acceptable alternatives. We suppose this could also apply to hula hooping, corn holing, axe throwing and even giant backyard Jenga, which of course leads us straight into the next requirement for any successful 3SD ...

Be Creative: So, if somehow the day gets away from you – again – don’t stress. Remember: a day is technically defined as one 24-hour period. That means if you commence sport No. 3 less than 24 hours after finishing sport No. 1, you’re golden. So take a load off, crack another can of carbs, and relax. Sleep well knowing you got this!

The next, next morning: The finish line is in sight. Dig deep! It may seem strange to be packing cold beers into a backpack at 10 a.m. (or maybe not) but you’ll thank us later. You’ve worked hard to get this far, and now is not the time to dilly dally, get into yard work or pick up that New Yorker that’s been carelessly discarded next to the toilet all week. Delve into the quiver, grab those skis and head north. Chances are you’re exhausted from your quest, in which case it’s perfectly acceptable to let gravity do the work and ride the chair for your grand trifecta. (Plus, when’s the last time you got to ski the mountain in late-April?)

Sport No. 3: The skis hit the snow at noon, precisely 23.99 hours, give or take a few minutes, from whence you began your grueling slog to glory. You’ve done it – 3SD bragging rights are yours. Revel in your accomplishment as well as how good you feel for just crushing three sports in one day. If you were a large sea-going animal, you’d be a gnarwal. In fact, you feel so good you even venture all the way to Chair 3, where you rip the blue runs like Lindsey Vonn with one leg tied behind her back, including a few runs you can honestly say you’ve never skied before. (Bonus points for first descents!)

The cool-down: Perhaps the most important step in any 3SD is replenishing all those spent reserves. Grab a comfy chair in the sun (of which there are plenty) and crack a cold one. While your two-sport buddies start whining about how they rode their bikes to the mountain, uphill both ways, be sure to regale them in your epic and heroic 3SD feats. They may glare at you with disdain or possibly wrestle you into a headlock. Pay them no heed – they are just jealous. But you, my friend, you are a champion and already scheming next weekend’s 4SD.