The waiting game
Sometimes, the waiting is the hardest part 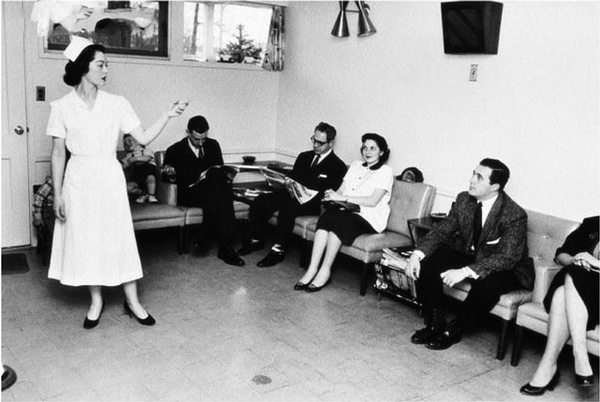 I can think of no human creation as ungodly as the waiting room. And yes, I considered the iron maiden, but ruled it out because, in one of those, you at least know with certainty you’re not going anywhere. Also the guillotine – the worst part of which is waiting your turn. This, kiddos, is how revolutionary France invented the waiting room.

The idea of a room itself is not so vile. In fact, I dreamed last night that my bedroom was a cave and I felt quite comfortable there. Dining rooms are delicious, and mud gets its very own tiny room. It’s room modifiers that make or break a room, really.

Yet waiting itself is not so terrible either. Some kind of thing comes to those who wait, but I’m too impatient to look up what it is. I am certain, however, that my ancient ancestors waited for days, sharp sticks in hand, for a wooly sloth to wander by or a particularly delectable-smelling neighbor. They may even have waited in a room much like my dream cave. Waiting is in my lineage.

But the modern world has messed up this genetic mastery. My ancestors waited FOR something. To spring into action, or to invent sharpened rocks, or to die of old age at 27. In a modern waiting room, oh let’s just say hypothetically the one I’m sitting in now, one waits simply to be called into another room where one will finally – I swear this is true – continue waiting, but in a more uncomfortable chair.

In this liminal space, a man – oh let’s just say hypothetically me – loses all sense of his life’s passions, his personal interests, even his bodily autonomy. He cannot remain alert FOR anything, like his ancestors primed him to do, because the environment is strictly anesthetized to remove thought-provoking stimulus, lest someone wander in and decide to stay forever. He also cannot create any amusement to occupy his mind or assuage his heart or relieve his bladder, because the moment he does, someone important will call him in, and he will miss it, and then he must start the whole waiting process all over again, with the added bonus of admitting to an underpaid staff member that he failed to hear the sound of his own name.

Incidentally, I believe this is why the United States of America abandoned the railroad for the automobile. What is a train depot but a waiting room, or an Amtrak but a waiting room behind schedule? Airports and airplanes are the same deal, but with a non-zero chance at peanuts.

I did not anticipate waiting in this waiting room; silly me, I failed to bring peanuts or any other snacks. So instead of alternating bites of food with liberal applications of hand sanitizer, I am contemplating mortality.

There is no priest on hand here to weigh in, so all on my own I have come to suspect that the primary distinction between Limbo and Purgatory – the godliest of all the ungodly waiting rooms, I suppose – is the volume of their TVs.

I used to think that a special threshold of hell was a waiting room TV with the volume on. The waiting room never shows the show you want to watch. It shows programs like “The Best of Last Week on The Price Is Right,” or “CNN: The 10-Minute-Loop Edition.” And the volume is never subtle. The audio is engineered to drown out the complaints of people being upsold on their oil change or learning that their flight has been canceled.

I have come to doubt this belief as of about 10 minutes ago. This particular waiting room is quiet. Too quiet. About 11 minutes ago, I figured out the quiet is coming from the television. It’s showing a marathon of “Little House on the Prairie,” and while I appreciate the silence, I cannot fathom why they even HAVE a TV showing “Little House on the Prairie” when there are so many home shopping channels that deserve to be muted instead.

One of these scenarios is meant to make us atone for our sins; the other is meant to punish us for all eternity. That’s presuming we even have souls once we enter a waiting room, a fact about which I am increasingly uncertain. I have been in an underground crypt with more vivacity than the assemblage of other people here with me. I’m dying to strike up a conversation with one of them, any of them, just to pass the time and verify they are actually breathing. But you don’t talk with strangers in a waiting room. As soon as you strike up a decent chat, they call for someone named “Jack Lively,” and you just KNOW your name will be next.