The war of words

In my neighborhood a house has been boarded up, its grass crispy and uncut, a stubble of weeds much longer than a five o’clock shadow. The absent owner leaned an enormous piece of plywood against the side of the house and crudely spray-painted the words, “Trespassers Will Be Prose.”

A slow walker will notice a faint attempt at spraying the letter C after the word Prose, but for some reason the fullness of the threat never materialized. I smile whenever I walk by, because in my imagination I have already scaled the chainlink fence and responded with my own spray-painted reply, “Visitors Will Be Poetry.” 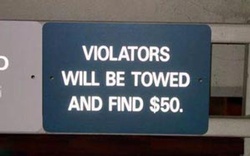 As a former English teacher, I’m keenly aware of how often people who don’t know me very well clam up when they learn what I’ve done for a living, as if their next spoken words might be circled or underlined in red ink, then given a
less-than-passing grade. I try to assure them that my own grammar is far from perfect, but they never believe me. After all, I do tend to stockpile opinions about words but I assure you it is only a hobby.

While teaching, I could always tell, for instance, when my students had a grasp on the most basic grammar just by noticing which ones laughed if I posed this simple riddle in class: what’s the difference between a cat and a comma? Of course, nobody would be laughing yet, not until I supplied the answer: one has its claws at the end of its paws, and the other is a pause at the end of a clause. At its root grammar is a kind of logic you don’t have to memorize.

But everyone stumbles over language’s peculiarities, and no one needs to feel guilty about being exposed with his or her modifiers dangling. Nobody’s perfect, and nobody should seek that distinction. Once I asked a doctor before undergoing a medical procedure if a colonoscopy would interfere with my ability to punctuate correctly. He scratched his head, gave me a quizzical look, and immediately put me under. I swear I heard a round of applause in the background before I lost consciousness.

The abandoned house I mentioned is on display for public comment, but an internet search yields many better examples. Lynne Truss, author of the 2003 best-selling book Eats, Shoots & Leaves, writes about a group I think of as “The Grammar Police” that roams streets in England, equipped with black markers and white paint, prepared to correct the most egregious errors they find displayed. Misplaced or missing apostrophes, commas gone comatose, crippled contractions, all misspoken signage that is helpless to correct itself.

Misspellings are the most common errors, some of them simply typos, and many of them switched by a software’s auto-correction feature. Occasionally a truly poetic misspelling unintentionally occurs. I’ve seen Thursday appear as Turdsday, which seems to me to be a perfect descriptor for having to spend one more day at work so close to the thought of Friday. These mistakes riddle many of the documents we reed too quickly without taking enough time to proofread.

I tried to explain to a student’s mother why it’s important to be aware of errors but not to get tense: past, present or future.

“My son has no idea what an adjective is.”
“That’s not unusual for a ninth-grader.”
“But he doesn’t want to know.”
“That’s not so strange either. Most adults hate grammar.”
“How will he ever be able to describe what’s going on inside of him?”
“Adjectives aren’t the only parts of speech that describe.”
“I have a confession.”
“I know, you’re not sure what an adjective is either.”
“It’s a genetic flaw. Not even my parents had a clue.”
“Relax. Millions of people lead full and happy lives without knowing.”
“Do you think if I study up and start using them my son will get interested?”
“You’ve already been using them.” “I’m sorry, I wasn’t paying attention.” “No apology necessary.”
“Apology. That’s an adjective, isn’t it?”
“No, apology is a noun, but sorry is an adjective.”
“How can sorry be an adjective when it’s an apology?”
“The labyrinths of grammar are complicated.”
“What’s a labyrinths?”
“Labyrinth is a noun, labyrinths is the plural form of the noun.” “I feel so stupid.”
“Stupid is an adjective.”
“Oh, well then, I feel so adjective.”
“Actually, the word adjective is a noun.”
“Is there a pill I can take to help me?”
“Grammar itself is a pill.”
“I swear I took it, but I never passed it.”
“It takes a lifetime to digest.”