The white gaze of denial 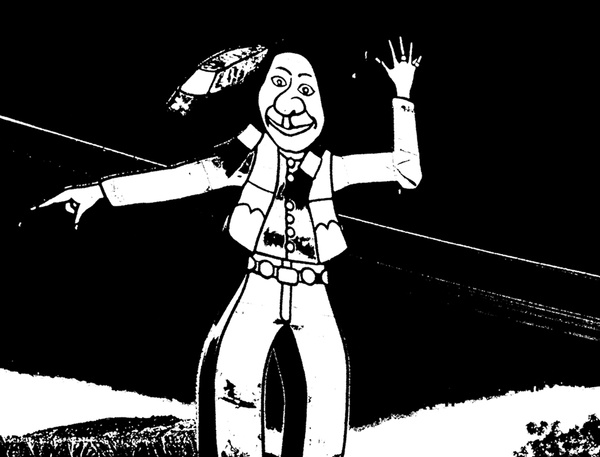 There is a line in the Propagandhi song “Victory Lap” where vocalist/guitarist Chris Hannah shouts, “God, are you there?/ It’s me, in the denim jacket./ Can you confirm I’m on the right g*ddamned planet!?” The thrash-punk song is a pummeling burst of anger and grief over ongoing injustices in this country.

And there have been numerous times when I myself have muttered that outburst, my soul shaking its fists toward the sky, especially in recent years regarding national and local issues. Especially as an Indigenous person navigating through the calamity of the white gaze that denies your humanity and distorts your voice.

To give a better understanding of the context here, it is worth going back to 1992, during the quincentennial anniversary of North America’s colonization.

In response to the growing Indigenous-led opposition to Columbus Day in the early ’90s, the faux-radical commentator Christopher Hitchens wrote a column for The Nation wherein he condemned the protests and bluntly justified the legacy and celebration of genocide that Columbus Day rests on. “1492 was a very good year,” Hitchens wrote.

Standing behind his White-Man-Knows-Best podium, Hitchens acknowledged the cruel injustices inflicted on Natives by the settler state. Yet throughout the column, he reminds the reader of internecine conflicts between Indigenous Nations, implying they are just as cruel. But unlike these barbaric warring tribes, Hitchens goes on to state that the European plunder of Native North America “inaugurated a nearly boundless epoch of opportunity and innovation, and thus deserves to be celebrated with great vim and gusto.”

Nearly 30 years later, one would hope such regressive views are no longer paraded around in public. Yet, to name one example, we have Rick Santorum to remind us the more things change, the more they stay the same.

The CNN yokel recently stood before the Pat Sajak-funded Right-Wing think tank, Young America’s Foundation. With the same bluster of Hitchens, he told the audience, “We came here and created a blank slate. We birthed a nation from nothing … I mean, yes, we have Native Americans, but, candidly, there isn’t much Native American culture in American culture.”

Perhaps there is an unsettling aspect of truth to these mindless statements. When one looks at the carnage and aftermath of European colonization in North America – the “American Holocaust” as historian David Stannard called it – in the most ruthless way, one could refer to it as the creation of a “blank slate.”

And traditionally, many Indigenous Nations have innately structured societies along matrilineal or egalitarian lines. This emphasizes a holistic sense of being with one another and the land, a form of communalism that is a world away from masochistic American sensibilities of “rugged individualism” and the hunger for private property.

Historically, any possibility of Native American culture influencing American culture has always been pre-emptively suppressed. One only needs to refer to the General Allotment Act in the late 1880s to see this sinister strategy at play. John Oberly, the commissioner of Indian Affairs at the time, stated in a report that Natives “must be imbued with the exalting egotism of American civilization so that he will say ‘I’ instead of ‘We,’ and ‘This is mine’ instead of ‘This is ours.’”

And yet, before such bureaucratic forces were created to enact Indigenous erasure, it should be acknowledged that in the early days of the American Empire, Benjamin Franklin, among others, was captivated with the governmental structure of the Six Nations Confederacy in the Northeast. The Onondaga Chief Canasatego advised early colonists to follow their model of a federal system if they wanted to persevere as a nation.

Maybe it is an unsettling thought for Santorum, but a trace of Indigenous influence is imbued in the blueprint of this republic. Then again, powerful white folks like Santorum have the benefit of denying the reality of history, and the reality of reality.

The denialism of Indigenous humanity also exists in our own community. Outside the Toh-Atin Art Gallery in downtown Durango, a grotesque racist statue still remains standing despite the criticisms and concerns from many in the Indigenous community. Dialogue between the business owners and Native organizers over how to ameliorate the situation appear to have come to a standstill for the time being.

In a recent op-ed in the Durango Herald that evokes the same patronizing tone as Hitchens and Santorum, Antonia Clark, co-owner of the gallery wrote, “We are sorry if our sign offends some people, but … Native people are facing many serious issues. Our sign is not the highest priority.”

The op-ed is a clever attempt at obfuscation, admonishing outspoken Natives for this impasse, while reminding readers of their white-savior complex through all their charity to Native peoples. The implication being such benevolent use of wealth should absolve the business of any accountability regarding the statue.

When folks with privilege attempt to discredit legitimate concerns and demands from Native voices by flaunting the charity in their checkbooks, I am reminded of what Indigenous writer Eduardo Galeano once said. “I don't believe in charity. I believe in solidarity. Charity is vertical, so it's humiliating. It goes from top to bottom. Solidarity is horizontal. It respects the other and learns from the other.”

For all the Indigenous-focused work that gallery owners speak of, one would think honoring the demands to remove the statue would fall in line with those acts. Until that happens, the proprietors are clearly lacking a sincere spirit of solidarity, and it is as obvious as a crude racist statue sitting out in broad daylight.

The white gaze of denialism and delusion will continue to persist. Yet it is inevitable that such views will become helpless driftwood, floating in a tide carried by Indigenous voices and movements rising up to reclaim what has been lost and stolen for centuries. In time, the waves of history will leave these variegated regressive voices of whiteness stranded on an island, devoid of any future, clinging to a mirage of the past.