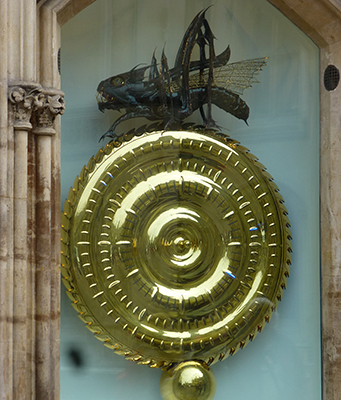 It happened a week ago, around midnight. I was dreaming of fireworks amid a civil defense siren that kept repeating what sounded like a Cold War era warning: The Russians are coming! The Russians are coming! I sat up, still disoriented by sleep, mumbling, What? What? I listened in the dark and heard a shrill chirp coming from some lost corner of the house. I got up to investigate.

I went immediately to inspect my vintage Russian Soviet CCCP Kauahguyckue Maritime Submarine Clock, a leftover from an intact factory churning out the war souvenirs for the world market, but it turned out to be nothing more serious than a little Chinese radio-controlled alarm clock I’d inadvertently set by moving it to a window sill earlier that evening so it might receive a better signal. I located the clock’s toggle switch, shut the alarm off and went back to bed.

As a child, I enjoyed falling asleep in the dark, listening to our family’s antique pendulum clock bong the hours, soothed by its tick-tock, its key-wound spring unwinding, that delicate symmetry of precision escape wheel teeth calibrating the night. Even after I’d drifted off, like magic, I often came awake just in time to count the 12 chimes of midnight. If not magic, then my restless nature might have been an odd foretelling of my present-day, more-than-a-passing interest in the instruments of time.

As the keeper of the family clock now that our parents have passed, I keep it in a closet. I don’t mean any disrespect. Before it came to me, my father, bored with winding it every week and dealing with two generations of maladjustments, dismantled the works, dumped all its parts – including the brass winding key – into a shoe box and mounted the old hands onto a cheap quartz movement. The new old clock lost its dignity but it ran without making a sound until I foolishly paid a clock repairman to reassemble the works inside the old oak cabinet. It ran for a month then completely quit.

Still, my house refuses to stay quiet, habitually producing enough peculiar little chirps to be mistaken for an electronic bird chorus. Our new laundry machine trills a tune to let us know when the wash is finished. The toaster oven goes bing, and if I sit in the chair where my after-dark light timer stays plugged into the wall, I hear a tiny ratchet churning like a bomb, preparing to unload a programmed burst of home-security around sunset. But most irritating of all is the ping when another piece of spam lands on my laptop.

One would expect technology to observe some kind of curfew in the wee hours of the night, but it never sleeps, leaving one red, white or blue eyeball always glowing from across the room like the tip of a lit fuse. A little scary.

What’s even more sinister is a recently invented and celebrated clock I have great affection for that hangs at Corpus Christi College. Referred to as the Corpus Clock, John C Taylor – a 1950s college alum – invested 1.8 million British pounds designing and building this impressive work of art. Its 5-foot diameter dial has no hands that point to the minute or hour. In place of the hands, three concentric and symmetrical circles of slits rotate and an array of blue LED lights appear to flash as the dial approaches the appropriate moment. Honestly, you’d need to study a guide before being able to decipher the correct time.

Perched above the dial an animated insect lurks that could frighten the legs off a grasshopper. This spring I stood on the corner of Trumpington and Benet Streets in Cambridge, England, staring up at the Chronophage (or time-eater) as it devoured minutes like potato chips. Every 60 seconds it slowly opened its mouth, then suddenly snapped it shut. It looked more like a steampunk locust, but the beast has been cleverly engineered as an escapement for the inner-workings of a very traditional mechanical clock, powered by a spring.

The Corpus Clock also toys with the idea of time philosophically, at least as we humans perceive it. The Chronophage is intentionally horrific in appearance because the passing of time has always represented our inevitable encounter with death. It lacks any sense of compassion. Every hour as it gnashes its teeth, the beast shudders. The clock occasionally seems to halt altogether, or even speed up, a reminder that time cannot be controlled by us. No chimes or pleasant bells announce the hour. Instead, a rattle is heard as a chain gets dragged across a hidden (thankfully not life-size) coffin and the hour is struck by a little hammer against its wooden lid.

It’s a relief to me that no scale models of the Corpus Clock are being marketed as tourist souvenirs. I’m afraid I’d have bought one for my bedroom wall. But even without one, I say with confidence the Russians can’t hold a candle to what the English have accomplished in disrupting a good night’s sleep.