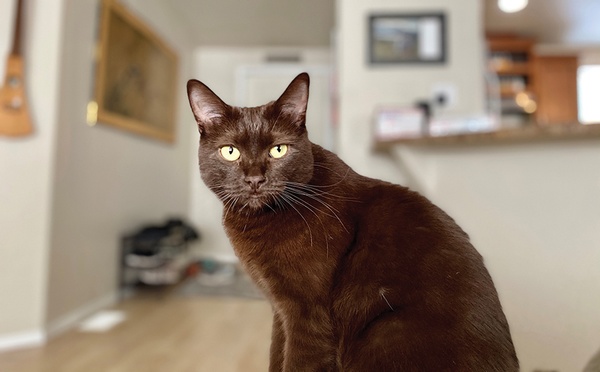 My back yard feels like death. I smoke out there or walk through on the way to my rusting Jeep, and my hackles rise every time. It’s like maybe enough things have died back there to haunt the place. And it’s quiet. The birds and mice are gone. We don’t see snakes anymore or signs of raccoons. When the elm seed bugs got bad this summer, my yard became choked with plumes of them, fliting around my deck like flies above a corpse. The small predators that ate the bugs were gone, forevermore.

My cat, Tina, is a precious princess. Maybe I should’ve opened with that. She’s brown with gold eyes that glow in the dark. And by “brown,” I mean brown like a chocolate lab, like the brownest crayon in the box. No matter how I describe my cat, people are flabbergasted when they see her, “Wow, she’s… brown.” Me: “Yeah, I told you.” Tina is a color that a cat simply shouldn’t be. She grew up to be tiny, too, which adds to her weirdness. Her face and mannerisms are beastly like a cougar’s, but her body is “smol,” as they say in the social media cat groups that’ve given me “top fan” badges. Whatever.

Tina was birthed in a barn in the backwoods of Durango and fed only fish carcasses by her first human. “Momma cat,” literally Tina’s mom’s name, gave scarce milk in the beginning and field mouse scraps near the end; Tina was the runt. She came to me just shy of being full-blown feral. I broke her with people-food and lots of games, with lasers or feathers tied to fishing poles, and now I love her forever and always, just like she loves me.

Though … Tina is more than a tiny brown kitty who’s so-so-so wonderful, and I need to admit it. She’s also a pernicious, predatory creature without the wherewithal to realize that she’s small. We’ve taken her to the vet thrice for stitches, always for a wound on her back or belly. Sometimes, the tooth marks are too big to be from another cat. There used to be a gaze of baby raccoons living by my neighbor’s house and I haven’t seen them in a while. Maybe Tina gave as good as she got.

The last wound was probably from the monstrous owl that lives in our neighborhood – it’s fat and grey, like that evil one from “The Secret of NIMH,” if you’re old and cool enough to remember. I imagine it picked her up and then regretted it, dropping her with a screech and bloodied feathers right into a $407 vet bill.

There’s zero exaggeration in this: my cat tried to take down a deer while my wife watched. Tina saw it across the street standing there like a huge snack, looked both ways and blurred into some bushes. Her tail swished, she crouched, pounced and landed a millimeter away from the doe. The deer looked down, ruminating on her cud and my cat, surely wondering why that mountain lion was so small.

But that’s just the fun stuff.

Tina keeps her mouse head collection in our back yard. It’s not just a couple. We never find the bodies, but heads litter the gravel, blending in like misshapen, furry rocks. My wife, Terra, took a picture of one that Tina wedged between two planks on the deck – it’s staring up through the crack, wilted eyes and yellow teeth. Can you imagine that death?

I’ve found her under the back porch (twice) with dead snakes that were big enough to make me taste a little fear. Each time she was posing like the Egyptian Sphynx with the snake ribboning over her forearms. The elm bugs swarmed above, just like flies around lions on the Serengeti.

Next came the birds, which were the hardest part. It was difficult to explain to my daughter why my kitty kills everything that moves just for sport, like that alien from “Predator.” The tree behind my house was once chockablock with warblers, and they’d dive bomb me with avian rage every time I lit a joint. I didn’t mind.

But Tina minded a ton. She’d bring them inside and make a special noise that meant she wanted us to come take a look.

But don’t take my word for it. British scientists have come up with test called the “CAT-Tri+” to determine the level of psychosis in your cat. I used it to rate Tina on a one-to-five scale via 46 statements designed to gauge a cat’s craziness by focusing on three traits: boldness, meanness and disinhibition.

Statements such as “my cat sits in high places” determine boldness. Tina likes the roof, so that’s a big-fat five. “My cat purrs while attacking people/animals.” Well, it’s the only time she purrs, so, six? That one had to do with disinhibition. The inescapable diagnosis came with the statement centered on meanness (if you are squeamish or a small varmint lover look away): “my cat torments its prey rather than killing it straight away,” which gives me flashbacks. There’s no deathblow with Tina: she torments until death is certain, and then walks away in disappointment. Another five. “My cat makes random and wild vocalizations.” Oh, you mean the 2 a.m. demon summoning? Five again!

But back to those scientists: they discovered through their research that all cats have at least some level of psychopathy. So, it makes me feel a bit better knowing all cats are crazy, not just mine. But that solace is limited, because the CAT-Tri+ test gave Tina an A+.

“Then keep your evil cat inside,” you’re thinking.

No. She eats the furniture. She climbs onto the table to eat the edges or perches on the back of the chairs to chew on the corners. Like a four-legged woodpecker, Tina destroys anything that was once a tree. Then she starts stalking us, and she means it. You can see the waves of fury run through her muscles, her ears twitch like antennae, and her pupils dilate rapidly. When she pounces, she pounces to kill. Humanity would be wiped out if we were all 7 inches tall.

As to the, “Well, you’re just going to kill your cat by letting her outside” argument I say, “Live by the sword, die by the sword.” That’s what it’s about in Tina’s universe. And really, what are my options? I can’t euthanize this cat who was alive when she came to me, who I love despite the fact that our relationship is based entirely on my self-defense. Nor am I going to kill her soul by keeping her inside where she’d chew herself toothless on anything with a corner.

So, that’s where I’m at, despite the fliers I’ve seen by the mailboxes suggesting that cats be kept inside. We all know who you’re talking to, Karen. I’ll deal with the feeling of death in my back yard because Tina – who’s named after the “fat-lard” llama from “Napoleon Dynamite” – will always be my precious princess.