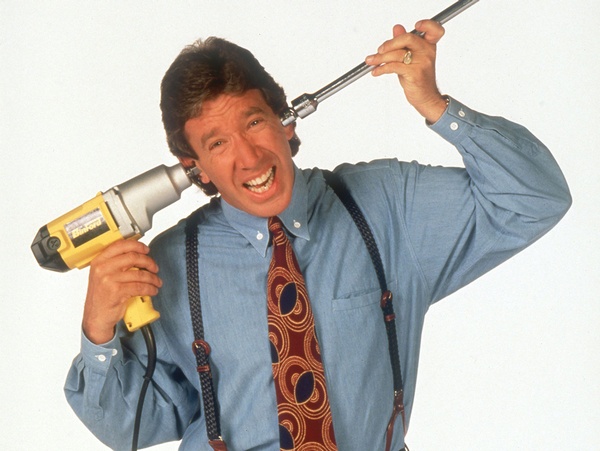 I’ve said it before, and I’ll say it again, because it spares me coming up with an original thought: I was an English major for a reason, and that reason is power tools.

Now don’t get me wrong – I like power tools. Particularly the power part. It’s the tool part that steered me toward analyzing literature. I am a precision instrument, particularly when it comes to working with commas, but my hands are… not. My hands can miss a stud and still strip a screw. My hands can – with no appreciable forearm strength – overtighten anything. It’s 50-50 that my hands will fold the legs on a collapsible table the correct direction.

My hands’ capabilities do not emasculate me, despite what the looks I get from workers at Home Depot say. I was also a philosophy major, and we as a people have moved well beyond Plato’s “I drill, therefore I’m man.” I find comfort in knowing I can look up what the heck a dangling participle is whenever I need to – this is my gift, far more than other, more homely versions of handiness.

But the unfortunate truth is that no participle, dangling or otherwise, will address a slow-draining shower. Or replace rotting steps. Or pretend that everything is just fine under the kitchen sink thank you very much. And the people who remedy these issues for a living charge an amount of money appropriate for paying back the loans on their work trucks, money that I do not always have, owing to the recessionary philosophy marketplace at the moment. So I am left to power up my own tools and maintain my home with my own two increasingly callused hands. Plus whoever I can bribe with promises of Mexican food.

Yet I am not as helpless as you might reasonably believe. Because I have YouTube. And of all the things I have learned by watching videos there, the most important is that one can create a followership in the thousands – a viewership in the millions – without a single public speaking or film-editing skill. This truth makes it perfectly clear what my next career will be.

Without further preamble, I hereby announce my new YouTube channel: Zach Fixes (Things Specifically in His Own Home).

Let’s begin with fixing my windows. Every single window in my house has come off its track to one degree or another, making them impossible to open and/or close properly, or at all. So look up here, inside the track. The manufacturer placed these little metal clips that you can pop out like this to easily remove the window from the frame. But either these clips are junk, or the previous residents grew so frustrated with the windows coming off the tracks that they attacked these clips with the battery end of their power tools. So if you watch me carefully, you’ll see my subtle solution. I roll up these towels – I do it by hand, but you are welcome to use your drill to save yourself time and splinters – and then I stuff the towels in the window… like this… to block the gaps and the drafts during winter. If my house gets too hot in summer, you can probably brute-force open one or two of these windows. If you break it, you can buy me a new one. And if you actually succeed, but the window won’t close again, you can just buy me a bigger towel before Christmastime.

Now let’s turn our attention to the slow-draining shower. We here at Zach Fixes (Things Specifically in His Own Home) recommend against using harsh chemicals, because power tools are more fun. This slow drain could be blocked by accumulated hair, or hard-water deposits, or my dog’s missing chew toy. There is no way to know without a snake camera, and no way to get a snake camera until that YouTube ad revenue starts rolling in.

So let’s turn to the one tool every man should have in his arsenal, no matter what he majored in, or whether or not he is a man at all: a Sawzall.

Remove the drain cap and stick the longest Sawzall blade you can find down the drain and let ’er rip. As you can see, after a few moments, the water now drains effortlessly. Where is it all going? Tune in next week and we’ll find out. For now, hit that subscribe button so the algorithm will keep you coming back forever.

Oh, and please, whatever you see here on Zach Fixes, do not try it at home. Come try it at my home instead. Even better? Bring your own ideas. I’ll feed you enchiladas ’til you drop.