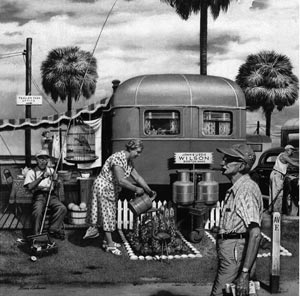 I’m a drug dealer living in a trailer park.

Or maybe I’m more of a kingpin, given that I handle the statewide distribution for a hash factory that’s hidden right here in Durango. But that’s not even weird nowadays. Even if you didn’t know we had a local hash factory that supplies 60-something Colorado dispensaries, it probably doesn’t surprise you to learn it.

It’s the “trailer park” part that’s the kicker. I exaggerate a lot. Embellish. My family calls me out for it all the time. I wrestled semantics a bit to call myself a “drug dealer” because what I do is respectful, W-2 and all. And I stretched it a bit on the other end as well. This “trailer park” is downright artisanal. It has real homes with bricks slabs, it has HGTV tiny homes with lighted gables, it has old-school trailers that’ve been maintained spotlessly by retirees. And it has three-bedroom manufactured homes that are indistinguishable from rich-people houses when you’re inside, sort of.

Sometimes, when I catch myself calling this thing a “manufactured home,” I remind myself that I might be embellishing again. I might be doing it to myself, playing myself, and that’s never a good thing. In fact, “don’t play yourself” is the only coherent thing ever said by DJ Khaled. So, I tell myself to be honest with myself, because if you look close enough, you can find the seam in this “manufactured home” and call it a double-wide.

Why is that so hard to admit? I’m walking distance to Oxbow. It’s right there. This place is nice-as-hell after a new paint job and laminate floors throughout. The driveways in this park are full of expensive cars and my neighbors are successful people: wine merchants, sheriffs, retired hotdog peddlers. Hell, my family is paying less than $1,400 per month for an in-town, three-and-two that’s pet friendly. For real, beat that. It isn’t possible.

But still, we hide it just a bit. I’ll catch my wife calling the laminate floors “hardwood,” and I’ll tell people that I live on Animas View Drive instead of giving something more precise. Seriously though, can you blame me? This is a town full of Joneses, each one harder to keep up with than the next.

My wife, Terra, and I have always done our best to race well, but we’re sick of being house-poor. We didn’t travel, and we weren’t going anywhere, both of which have separate meanings when you think about it. We were just paying to have shiny things, and after the fiasco that ended my last career, it was becoming too painful to

fund the ruse. So, we moved into something taboo, put in the work to make it livable, and we let the Joneses get out in front where they belong.

Is it even possible to keep up?

Let’s look at some statistics: the average home in Durango sells for $17 trillion. The average job here pays about 0.001 percent over minimum wage. Un- less you were born into something lucky, or unless you’ve been here forever, this isn’t the place for you. However, many of us pretend otherwise. We eat the oysters right alongside the people who can afford them, and we ride the trails with last year’s model, because oddly enough, it still works.

I’m done with pretension, and maybe not just because I have to be (it’s pretty convenient that I’ve “decided” to accept a necessary lifestyle downgrade). And we have a plan, too. We have our tiny condo here, and we’re gunna try to buy a tiny condo

someplace with saltwater. We’ll try to manage both properties, and we’ll try to amass enough money to bounce back and forth (we’re behind schedule by a whole f@*$ing bunch). And long from now, we’d like to smile when we pass a trailer park, rather than endure the looks we get when people pass us today.

So, this is me coming out of the condominium. I’ll take the shame of living in something mobile today so I can afford something stagnant later. Hell, I’d fly a flag on top of this thing to declare my independence from appearances, but flags in trailer parks are too cliche?. Know what I mean?