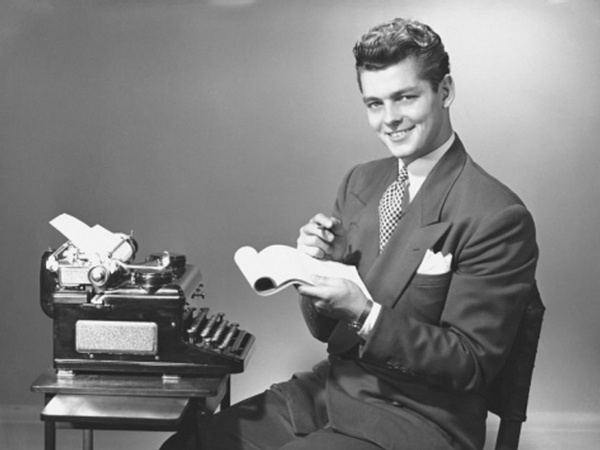 So to get these people Facebooking about something else for a while, I decided to walk a mile in their shoes. Not literally, of course, because shoe comfort has come a long way since wooden soles. But I decided to inconvenience myself by writing this column on a typewriter.

Now, in the interest of full disclosure, I first write most of my columns by hand. Then I type them on the computer, because the editor would probably slash me with an ice skate if I submitted my columns by texting her photos of my handwritten draft at 9 a.m. on press day. But to really get into the mindset of developing sympathy for people older than me, I needed to transcribe my handwritten draft on the typewriter before asking a youth to log on to my AOL modem so I could email the editor for her mailing address.

Fortunately for this experiment, I already have a typewriter. It was my mother’s portable model Royal. I’m not certain it’s been serviced since the Carter administration, but nevertheless, I saved it years ago from a future yard sale. Not because I intended to use it, mind you, but because kids these days are into decorating their apartments with retro devices they don’t even understand how to use. Things like washboards and mustache wax and ovens. And, you know, typewriters.

So even though no one from my generation on down knows how to use their hands on anything that’s not a computer anymore, I seated myself in front of the mint-green Royal. I was armed with only my pen-and-paper draft, the lunch I’d just made for myself, and a distinct lack of access to YouTube how-to videos.

I rolled in the first sheet of paper. I was raised on just enough movies featuring typewriters to know what I needed to type first:

“It was a dark and stormy night.”

Brilliantly rendered, each keystroke flawless, because I didn’t have any correction tape and I really didn’t want to have to type this column more than once. I mean, being a writer and all, I’m a decent typist. But here’s where I developed sympathy for people older than me, who peck at their phone screens with two index fingers (in those rare instances when they are on their phones, mind you, because they are NOT as obsessed as kids these days).

These typewriter keys required more gumption than my pinkies, unhardened by manual labor, could muster. I was reduced to two-finger typing, which meant I needed to perfectly render the next line of text, as well. After figuring out how to move down the page without a “return” or “enter” key, I typed it:

So the spacebar key didn’t entirely work. But you know what? I believed people would understand my intent. So I left it as I created it, and I paused here to stretch my weary finger joints and size up my handwritten sheets for what to type next.
And my heart broke because nowhere in my pages and pages of drafting did I begin this piece with the words “It was a dark and stormy night.” I had wasted untracked minutes, not to mention my fingers’ freshest and most vibrant energy, on a line that no one would ever read.

I seized the paper to jerk it from the typewriter, as creatively frustrated writers with misunderstood genius tend to do in films with typewriters. (Jerking sheets from computers is, I understand, much less dramatic.) But the paper got stuck in the typewriter instead of jerking free. I had to smooth it back out to feed it the rest of the way through.

By this point, I was even too emotionally tuckered to crumple the paper and throw it, with a natural balance of disgust and ennui, at the wastebasket. Good thing, because (as a kid these days) I don’t even own a wastebasket. So I laid the paper in the recycle bin, and I decided that the people older than me may also be wiser than me. They had moved on from rotary phones and adapted to smartphones. Which is why I trust that the editor is fine receiving this piece via Snapchat.