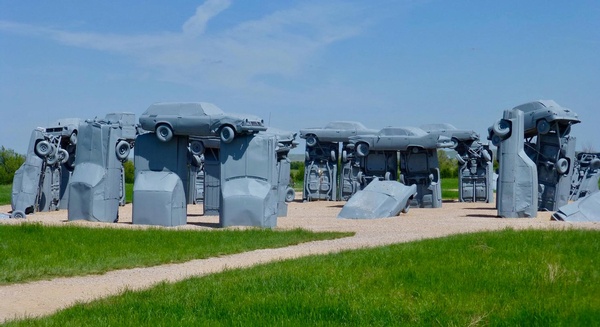 It requires determination to reach the Nebraska panhandle, an area wedged between South Dakota, Wyoming and the northeast corner of Colorado. Some might go so far as to suggest there’s little to recommend the attempt. But over 60,000 visitors set their sights on a strange tourist site every year, what has been dubbed “one of our nation’s 10 wackiest attractions.” I finally managed to have an up-close encounter after decades of making promises to myself. I missed its official dedication on the summer solstice of 1987, and the enormous gathering that camped out for a glimpse of 2017’s once-in-a-lifetime total solar eclipse.

Carhenge depicts a recycled piece of history, an impulsively accurate replica of England’s prehistoric Stonehenge ruins, which have been falling apart on the Salisbury plain since 2000 BC. Like its ancient counterpart, Carhenge occupies a circle containing three standing trilithons, two station stones, a heel stone, and a slaughter stone, all placed to mimic the original.

As its name suggests, nobody dragged monolithic stones across the Nebraska Sandhills to engineer the Carhenge installation. Instead, artist Jim Reinders in 1987 retrieved 39 dilapidated heaps from local sources, all of them mid-20th century American auto salvage, pumped up the tires and rolled them into the circle. The work was completed in six days. When finished, 22 cars were tipped into 5-foot trenches to stand with the headlights pointing toward the stars. Eight were laid flat across upright car pillars and welded in place to imitate traditional trilithon arches. The entire structure was subsequently painted grey, as if to mimic the color of stone, but I suspect the family just wanted to avoid the endless chore of washing and waxing their cars.

Carhenge is not a tribute to classic American automobiles, although any savvy autophile might easily identify a ’61 Cadillac DeVille, a ’65 Chevelle, and a ’51 Willys Jeep in the mix. Overall, the cars are lackluster. Mostly they qualify as carcasses rescued from the jaws of the crusher. The literature says the monument originated as a tribute to the artist’s father and no doubt that’s true, but the finished product also qualifies as an elaborate tribute to parody.

A 2017 interview with 90-year-old Jim Reinders exists on YouTube, and you can still see the twinkle in his eye as he recounts his personal history working for an international oil company as a petroleum engineer, being shifted to many locations around the globe. His time in London was his favorite assignment, partly because it provided plenty of up-close time with Carhenge’s distant relative, a place he loved to visit and revisit while living there.

Standing in the Carhenge parking lot, glancing across its 10-acre field, I could appreciate how perfectly the Reinder clan memorialized America. After all, most people arrive at this remote site north of Alliance, Neb., by car – our legacy to the world, like it or not.

Erecting the monument required six days with a crew of about 35 relatives and friends. Of that monumental undertaking, the artist writes: “We were able to reduce the time of the original Stonehenge construction by 9,999 years and 51 weeks.” And, as if to drive the point of America’s auto-

motive birthright home, three smaller foreign cars were buried at Carhenge with a sign that in part reads, “Here lie three bones of foreign cars. They served our purpose while Detroit slept.” An appropriate wisecrack delivered by a high priest of irony.

It surprises me that the sculpture received so much criticism when first completed. Detractors maintained it was an eyesore and should be torn down. I wish this sort of sentiment would erupt in my neighborhood where junk litters the landscape of back yards and backlots, and where salvage yards cover acres of countryside because an old car might one day need a part discontinued by a dealer. I know of one place where a buried car with its windows rolled up served as a makeshift septic tank. How many heaps does one need to abandon behind the garage before a feeling of nirvana replaces that urge to tow another fixer-upper home.

A group known as the Friends of Carhenge rescued the Reinders. While grumpy neighbors complained, loosely organized defenders maintained the monument had market potential and an ability to enhance the local economy. Some political bickering ensued. Eventually a comment box appeared on site where visitors reacted to what they’d seen, and an overwhelming unspoken support for the project emerged, not only among the community, but also among a small but steadily growing tourist population. Eventually, the Reinders gave the 10 acres to the city of Alliance and one of the “wackiest attractions” in America found a semi-permanent place on the map.

I say “semi-permanent” because in the earthly game of rock, metal and scissors, Stonehenge will certainly outlast Carhenge, and internet pictures are a poor substitute. If visitor statistics continue to surge, it’s only a matter of time before the city council proposes sacrificing the occasional tourist.