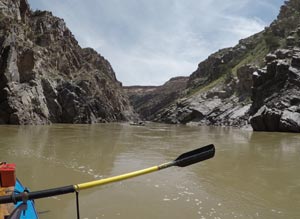 There comes a moment in every kids’ life when it’s time to graduate from the kiddy pool. You know, run with the big dogs, take off the training wheels, graduate from JV. (Yes, I know you don’t technically “graduate” from JV, but I never played high school team sports, so what do I know?)

And it’s our job, as parents, to safely guide them in this coming-of-age experience. We must ensure it’s a positive one that won’t irreparably scar them for life or drive them back into their dark kid caves. You know, setting a good example just like our parents did for us – or would have, had they not been busy smoking cigarettes, drinking martinis and Tab (not together, mind you), and driving around without seatbelts. But we are much smarter these days – we wear helmets. And seatbelts.

So, I decided it was time for my daughter, at the ripe age of 121⁄2, to step it up from the “kiddy pool” of the San Juan and Animas rivers to the fabled rapids of Westwater Canyon on the Colorado. Now before you go calling social services, allow me to explain. Yes, springtime flows on the Colorado often reach ludicrous levels. But this year, thanks to the drought (which I never thought I’d say), instead of hitting the “terrible teens,” peak runoff languished in the 7000s. A respectable, friendly level; still spicy, but not ruin-your-boardies spicy.

And rest assured, it was not I who piloted her through. I played the “shoulder injury” card and conscripted a good friend, who is more capable than I in the large-craft whitewater arts, to row my 16-footer. When in doubt, it’s always good to put your child’s life in someone else’s hands. Said no one ever who wasn’t me. (For those who have never dislocated their shoulder, I highly recommend it. Sure it kind of hurts at first, but it’s a fabulous excuse to wuss out of all manner of potentially dangerous situations.)

The plan was for Scarlett and I to paddle assist up front on what we had christened the “Princess Boat.” This was in honor of its all-female crew, as well as the 4-inch Barbie pink Paco pad (aka the “maxi pad”) tied atop the cooler and the newest member of the royal family, whose nuptials were taking place that weekend.

As crew, we would also perform the valuable duty of scouting for keeper holes, sleeper wrap rocks, killer sharks and of course, the all-important vishnu schist. This is because, in addition to being the “basement rock” of the world and providing a valuable geography lesson, a huge slash in the schist wall on river right signaled the crux move on the run.

Yes, I am talking about Skull Rapid. (*Which is best said in a menacing, deep Vincent Price voice. Sure some crusty old Westwater experts may say Sock it to Me is the crux move, as its massive hole is harder to sneak. But, overrated or not, nothing fills a boater with the urgent need to evacuate his or her innards quite like the rumbling of Skull.) There, where the rock wall splits and the river makes a sharp turn, carved out by eons of churning whitewater is a circular, sheer-walled, bubbling black cauldron from hell, aptly named the Room of Doom. As the name would suggest, it is not a place where one wants to spend any time. River lore is full of tales of bloated cow carcasses terminally recircing in the Room, as well as river runners, unable to break the eddy fence of “Shock Rock,” abandoning ship and making the hairball scramble out of there.

Of course, I didn’t mention this to my young prote?ge?. Mostly because, in my dozens of times running Skull, I had always managed to steer clear of the Room. Plus, for kayakers and skilled oarspeople, there is a river-left sneak that safely skirts the Room as well as the massive riverwide hole next to it. Which I also did not mention.

But my silence on this topic was not because I had never had the grave misfortune of hitting that, either. Au contraire, I had seen that yawning, Mack-truck-eating chasm enough times that it haunted my dreams.

“You don’t need to scout. The move is just left of center,” some carnivorous friends, smelling my rookie fear, advised me on my first Westwater trip. “You got it,” they said, as I white-knuckled my brand new paddle. “Piece of cake.”

And then they quickly scurried away to score a front-row seat for the carn. Which, I hear, was quite spectacular – only to be surpassed by my subsequent trip through Skull, in which I managed to somehow flip above the hole and go in upside down.

Miraculously enough, I emerged from both instances relatively unscathed, even pulling off a roll the second time around. Needless to say, since then, I have done everything in my power to stay as far away from the clutches of that monstrous pit of despair as possible.

But, if there was one piece of river wisdom I wanted to impart on my offspring (other than to always bring more beer than you think you’ll need) it was this: respect the river or get b-slapped. (Yes, I know that term is not P.C., but the river means business, people.) And with that, I fastened a helmet on her head – which she immediately protested. We were bickering over the importance of helmets in not getting b-slapped, as the shiny black split wall loomed. The deep roar of Skull – and a sharp rebuke from our Captain – snapped us to attention.

We silently floated through the slack green water above that all-too familiar horizon line, setting up for our move left. We dropped into the fray, and one of the oars hit a rock. And in that split second, we went from our must-make moment to an oh-shit one, and the river got the upper hand, ready to slap us down. With no momentum, the lateral separating us from safety bounced the Princess dead center, right down the tongue and into the mouth of the beast. And that’s when I imparted another piece of motherly, time-honored river wisdom: when all else fails, square up and paddle like a mofo.

What ensued was a melee of gutteral grunts, hysterical screams, frantic air paddling, heroic high-siding and colorful profanity more befitting “The Deadliest Catch” or the sinking of the Titanic than this family publication. And then ... cheers. The Princess emerged shiny side up, albeit tiara slightly askew.

As we celebrated, I wondered if Scarlett understood the feat we had just pulled off: a successful run through the meat of the fabled Skull hole.

“That was awful,” she said, her face plastered with wet hair and looking like she’d taken a ride in a Maytag. But her huge, soggy grin told a different story. And that’s when I knew, she understood perfectly.