Urning to be free 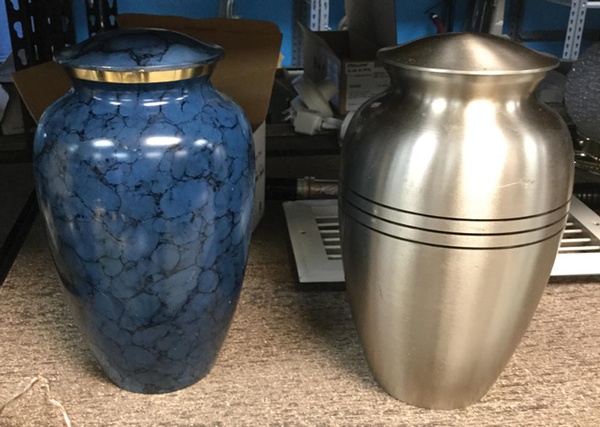 One thing you never expect to find in a thrift store is your parents, and I don’t mean an elderly couple strolling the aisles reminiscing over items they used to own when they were young. Parents, especially retired ones living on fixed incomes, appreciate thrift stores offering regular senior discounts. By now you are probably imagining sweet old people holding hands in a secondhand shop, searching for bargains. But no, the couple I’m referring to was situated on a shelf in two polished and permanently sealed funeral urns.

Seriously. I picked them up and felt the heft of ash shift inside. I tipped them to peek at their bottoms where a volunteer had scribbled a price. $6. Each.

To be clear, these were not my parents, nor may they have been anyone’s parents I have ever met, but I assure you they were two expensive cremation urns with three to five pounds of soft, loose something sealed inside – what I know to be the approximate weight of an incinerated corpse, minus pocket change. I carefully placed them back on the shelf, side by side, puzzled by what I’d found.

Mark Twain characterized the here-after as “Heaven for climate, hell for society.” Where ending up in a thrift store fits into these options is hard to say. A sympathy welled up inside me. I felt like handing the money over and taking these unwitting eternities home with me, maybe hammering their lids loose and scattering their remains in more traditional locations like beautiful meadows, shimmering lakes or rivers, or emptying them over the edges of a ruggedly alluring cliff. It would have been the proper thing to do, because all cultures seem to agree the dead deserve our respect.

As I stepped back and sat on a slightly worn but perfectly serviceable couch that was itself hoping for a second life, I pondered what to do. I watched another customer pick up one of the urns, cursorily examine it, and return it to the shelf. Moving 6 feet to the left, she leaned forward to look deeply into a bathroom vanity mirror, as if testing the temperature of a quiet pond by touching its surface with one finger, then she wandered away. Soon a young man grabbed an urn and held it up to the light before putting it back. No sale. Life moves on.

The thought of spending eternity in a thrift store prompted me to consider those residents temporarily evacuated from their homes near Purgatory, not the theological way station between heaven and hell, but the ski resort. With summer fires incinerating over 50,000 acres, I can only imagine returning home after fire containment, understanding all too poignantly a future reduced to ash, as do the fire crews who spent so much time in harm’s way. It must have felt like an eternity. Thankfully natural optimism is not limited by acreage, so forests, given time, anticipate a better existence.

Our own fate is more subject to speculation. The average funeral today costs between $8,000-$10,000, which partly explains why almost half of the dying opt for cremation. Anyway, I would have felt less comfortable finding two sealed coffins pushed up against a couch in the furniture section.

To my delight, a friend related a personal insight when I related my tale about finding the urns. His experience helped me put a funeral home’s excessive add-on expenses associated with death into perspective.

Personnel quoted a price of about $400 to purchase an urn. Can’t be helped, my friend thought, but while sorting his relative’s household to dispose to her worldly goods he discovered a beautiful piece of stoneware. He called the funeral home to ask if a piece of pottery could serve as an urn. Reluctantly, the funeral manager agreed, but apprised him of the legal requirement for putting any pottery in a burial box

if it is be placed in the ground. My friend asked how much? About $400 was the reply. While continuing the excavation of his aunt’s belongings, he came across a surprisingly serviceable metal storage trunk. Would that do for containment? He called. Hesitantly, the substitution was approved.

How these cremation urns turned up at the thrift store may have a completely reasonable explanation, but I’m not sure I really want to know. Until someone involved writes me a letter with another good story, I’ve decided that ending up where you never expected may be a happy alternative to our streamlined rest-in-peace industry. After all, as I witnessed while seated across from my mystery couple, the living are still inclined to hold you, sometimes tenderly, or they gently upend your complacency by shifting what used to be your bones like sand in an hourglass. I wouldn’t be opposed to a little more of this kind of existence before moving on to the greater and unquotable unknown.