Walking in someone else's shoes 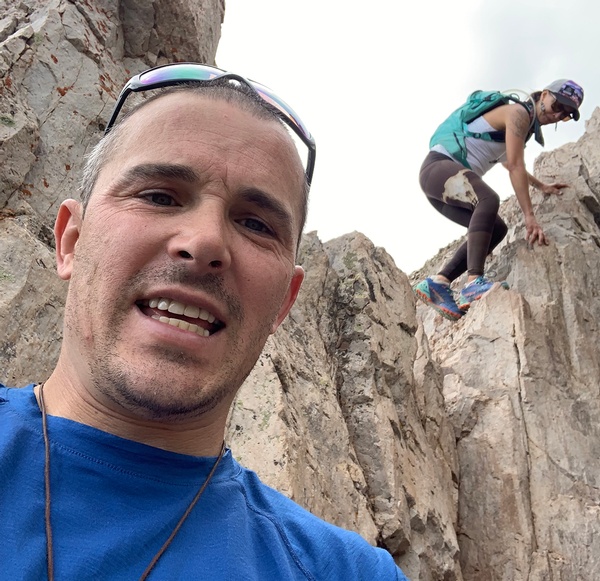 “They lied to me,” the man said in a Texas drawl. “They said Engineer was easier than Snowden. This is hard.”

“Yeah, they may have misled you,” I said. “This mountain does have some technical sections, it’s no gimmie.”

The man then went into a rant about how it was everyone’s fault but his that he couldn’t hike the second class terrain above him. It was the guidebook’s fault, it was the people who told him about the hike, and most of all, it was his hiking shoes, which to me looked just fine.

“Let me see your shoes,” he said. “I think I have the wrong kind of shoes. Those are the shoes I need.”

By then, clouds were a brewing and there wasn’t much time for chit chat. “It only gets more difficult,” I explained to him, as my girlfriend, Amber, and I kept moving, hoping to summit before the rain started.

We tagged the peak, with more dark clouds rolling in. By the time we made it back into the trees, lightning was cracking and thunder was rolling, and we were moving as fast as we could to get back to the car. That’s when we came upon “Mr. It’s Gotta be the Shoes.” I cruised by him, but he stopped Amber.

“Hey, what kind of shoes are those?” he inquired. “I need to get me some of them. That’s why you were able to climb to the top, huh?”

Amber politely told him what kind of shoes they were, all while I’m thinking: good shoes will never replace fitness and preparedness. I wanted to scream, “It ain’t the shoes brother! It’s because your ego is bigger than your fitness level! You gotta put in work to hike mountains.”

Like most good comebacks, though, the thoughts arrived too late. Plus, there were more important things to tend to, like running from lightning.

That night we recounted the story for friends over happy hour, and of course they had similar stories of unprepared tourists with egos the size of Texas. And that got me thinking: what is it about humans that makes us so unaware of our limitations? And why do we think other people care if we can climb the mountain or not?

I used to care. I came West 20 years ago with no identity other than being a guy who liked to go to jam band shows. Then I found climbing, and with it my identity. Quickly after, I met the old-timers, those who came up climbing in the late ’60s and early ’70s. I learned many lessons from them, but the one that stayed with me the longest was the message of humility. In many sports it’s all about trying to be the best. But in climbing, it’s all about trying to be your best; not just for climbing but your best person. And a big part of that was being humble.

I think it’s because sooner or later, the mountains will humble you. They will bring you to your knees. Whether it’s a dangerous situation, the loss of a friend or simply going too long without food, when you spend enough time in the mountains, you realize it’s their world, you’re just passing through.

Sometimes I wonder if the seriousness of the mountains is properly conveyed to tourists who arrive thinking they will conquer them. After all, every time one drives into the state, there is an awesomely quaint sign that reads “Welcome to Colorful Colorado.” But maybe there should be a tagline under it reading, “these mountains want to kill you.”

Too much? Maybe. But the mountains don’t care about your ego, your desires or your climb. They simply are, and quite honestly, that’s something us humans are not very good at. We want the quick fix, the fast money, the big car, the widescreen TV, the massive RV and the house on the hill. We want so much that it brings us down.

These days, my favorite place to climb is in the desert – oh how lucky we are to be so close to both the mountains and the desert. I used to think that climbing in the desert began in the last few decades. But, over the last few years, as I’ve explored more and more remote places, I’ve learned that humans have been climbing vertical rock there for thousands of years. I’ve found pottery shards and structures in impossibly high places from the Ancestral Puebloans, brought there long before the modern shoe, let alone the climbing shoe, was invented. These people were not climbing for fun, they were climbing for survival. And their bravery to face these vertical rocks with nothing more than a yucca rope and yucca sandals is absolutely heroic and mind blowing.

The great outdoors are humbling, but I also think that humility is something we need to learn from others. Getting humbled, but also being encouraged to be humble, is a great pairing, like a cold beverage in the hot desert.

The other thing I think we all need to keep in mind – and we might need to hear this often – is that no one else really cares how hard you send it. Often the top tier athletes are the most humble human beings. I think it’s natural for our egos to question our legitimacy in the land of supernatural athletes, especially when we’re having an off day. But again, the reality is: NO ONE CARES how hard you crush, and generally, I think the only thing people care about is how nice and respectful you are to your fellow human on the trail, the mountain or the climb.

The journey of a thousand miles begins with one step. And if you start that journey with humility, it will be much more meaningful than the bullshit of conquering a mountain that will conquer you in the end; no matter what pair of shoes you’re wearing.

Luke Mehall is the author of five books, including The Desert, a dirtbag climbing book. He is also the publisher of The Climbing Zine, a tri-annual publication based here in Durango.