What would Willie do?

In this age of rectangular glowing screens, I figured getting a record player would be the perfect remedy. My girlfriend, Amber, thought it was a good idea as well, and lately we’ve been enjoying the romance of spinning vinyl in our living room.

Buying records has turned into a fun little pastime, and it gives us something to do when we happen to find ourselves with some time to spend, in just about any decently sized town. We’ve got a nice little record store here, too, and I’ve been able to score some of my favorite albums by the likes of the Grateful Dead and Bob Dylan. 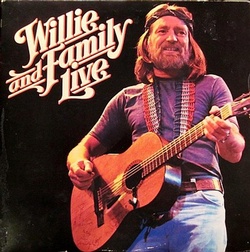 In addition, anytime I’m at a thrift store I “dig through the crates” as they say. There’s usually plenty of Barry Manilow, but I’ve learned it’s quite difficult to score a record I actually want to listen to at a thrift store. Thus, when I found a four-record set by Willie Nelson, called “Willie and Family Live,” for the cool price of $1 I was beside myself with stoke.

The first thing I did after I paid my dollar plus tax to the nice older man working the counter was to text Amber a photo of the album cover. We’ve dug through many crates together and finding some Willie in the midst of mediocre Manilow felt like a small miracle.

When I got home and dusted off the record, I looked through the liner notes and realized the record was recorded in April 1978. I transported back in time and realized both Amber and I were in the wombs of our Mothers when this record was recorded. I wondered about the journey of this record. Was it played in a trailer park many evenings over
whisky and cokes? Or did it belong to a college student who played Willie with a toke or two in between studies? What has this record seen in its nearly 40 years? And damn, it’s a beautiful thing it’s still playing. Ain’t nobody going to be buying CDs in 40 years. They don’t make ’em like they used to, huh Willie?

Then my imagination really got going. I started to think about Willie, our beloved pot-smoking, tax-evading, blue-eyes-crying-in-the-rain Texas icon. I started thinking about America, and the mess we’re in.

I’ve always loved Willie. In college, he and Jonny Cash were my gateway to an America that was both documented and imagined in music. They were rebellious, loving, tough, vulnerable and hopeful. No one can sing about heartbreak and being lonely like Willie. In fact, in his early years, it seems like that’s all he sung about. He kept me company for many lonely years out on the American road trying to find myself. Most of all, Willie being Willie, says you can do just about anything you want in the United States, which of course is bullshit. But in the realm of American music, anything is possible.

Then I started thinking about American icons, and what Americans love, and “Trump the Bitch” (in case you missed Eminem’s rap on the Black Entertainment Television Awards last week.) I thought, what if Willie Nelson had had a meteoric rise to the top of American politics instead of Trump?

First things, I know that weed would be legal nationwide. That’s obvious. And, probably Willie would tell everyone to stop paying their taxes (outdated joke from the past that all my peoples 40 and over might get). But what about the big things? What about

the things that us anti-Trumpers are worried about? Like nuclear war, white supremacists, the environment ... What would Willie do?

In America we are equally as known for greatness as we are our deep capacity for evil. Yeah, we landed on the Moon first, but we also enslaved African Americans for hundreds of years. We created national parks, but we did that right after committing genocide against the Native Americans and taking away their land. And sometimes we half-heartedly choose our leaders. I mean, let’s be honest,

Trump is president, in part, because he was a popular reality TV star, and Americans love TV.

You know who else America loves? Willie. Well, I’d also like to think everybody loves Willie. (Except maybe Customs and the IRS.) The same people who championed Trump may have also championed Willie. America ain’t guided by no facts, it’s guided by feelings, and no one, not even Trump, elicits stronger feelings than Willie.

And just imagine how Willie might deal with the problems of the world. My guess is that he and Lil Kim Jong-Whatever might share a peace pipe and call off this whole World War 3 business. He’d host a benefit concert to help the victims of the recent hurricanes and wildfires. He’d damn sure want to make health care and higher education available to all.

Most of all, with Willie in Chief, I think we’d see a message that we so desperately need right now from an American leader: love each other, and unite in our diversity and differences. Don’t be so damned uptight and fearful. Grow you hair out and let your freak flag fly. We can acknowledge our past, but we can’t be bound to it. As a country, we are always fighting something, so let’s be real and fight evil. And, maybe, just maybe, as a people we can sing the lines of “Amazing Grace” as beautifully as Willie and Friends did on that record that’s spinning a lot in our house these days.