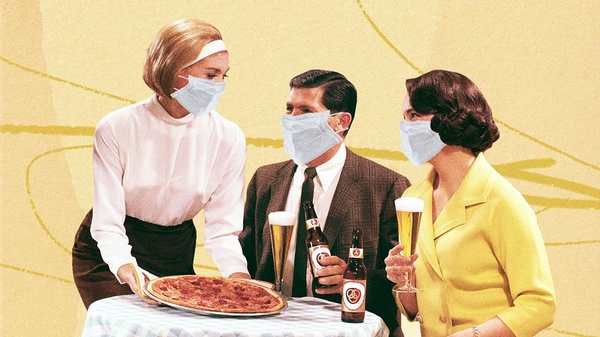 A few weeks ago, I was quite stoked to see a new special pop-up on my Netflix feed featuring Aziz Ansari, a comedian and star of “Parks and Recreation.” I knew I’d watch it right away, but something made me do a double take: the special was filmed in my favorite comedy club, The Cellar, in New York City, which I go to with my brother Clint nearly every time I visit the city.

My brother lives in the suburbs of New Jersey, and every trip to The Cellar is special. He’s got a family, and I only see him once or twice a year. Something else about the Netflix show made my head spin: it was a surprise performance filmed last December. Clint and I had tickets for a show at The Cellar in December, when I was visiting for the holidays. But because of the massive COVID surge, we decided against venturing into the city. Could that have been the night Aziz popped in to record “Nightclub Comedian?”

I’ll get back to that, but something in Aziz’s heartfelt special got me thinking about work. In his show, Aziz notes how much service industry workers in our country have been taken for granted. And of course, he brilliantly weaves jokes into the bit, but the jokes aren’t what still has me thinking about it weeks later.

I worked service industry jobs for a good portion of my working life, mostly in restaurants. I’ve been a dishwasher, bus boy, prep cook, line cook and manager. I’m guessing many of you reading this have held at least one of these jobs, too, given that Durango once had the most restaurants per capita of any city in the United States. Anyone out there know if that’s still true? Perhaps the loss of that frozen yogurt establishment set us back? Who would have known you couldn’t sustain a frozen yogurt business in this town with Trump and Boebert signs in front? Free market capitalism still works, I guess. But I digress.

I had many eras in my restaurant career starting with punk teenager who could barely get the dishes done, to late thirty-something manager with hopes of “getting out of the game.”

My favorite era of working in restaurants was in college, when I knew enough to be a decent employee and met the co-workers who would become life-long friends. That was my favorite thing about the restaurant life, that camaraderie. My favorite co-workers were my fellow climbers who not only talked the talk, but would get out on the rock with me the next day. In that era, I really felt like I was living the dirtbag dream. I was so naïve; I thought I would do that forever.

But I paid the price for that naïvete with years of being stuck in the service industry, and honestly, I became unhappy. Eventually, I had to face that unhappiness and ask myself what I wanted to really do with my adult life.

The last stage of my restaurant career was here in Durango, while I danced the Durango Tango, writing and hustling in the morning, climbing during the day, and working away feeding people at night. It was truly how I got to know the people of Durango, and I’ll forever be grateful for that. There are so many unexpected perks of working in the service industry, networking and free food amongst them.

Thankfully, my publishing business survived the last two turbulent years, and at this point, it looks like I’ll never go back to restaurant work. But, I still frequent restaurants in this town, including the one where I worked and ended my service industry career. I’ve heard from one friend that, while some customers are ruder than ever, the nice locals are even nicer.

I get that. On lonely days during this pandemic, sometimes the only humans I’d interact with in real life were the folks rolling my burrito. I always try to be a good customer – with a smile and a thank you – knowing that these gigs have become more difficult over the last two years. It has to suck wearing a mask on a hot summer day, while working over a grill, next to the hot griddle, next to the even hotter fryer. The price of living is getting more expensive, and I’m doubtful pay is getting much higher.

Yet, many restaurants seem to be keeping calm and carrying on, feeding the people and making it all work. And for those of you feeding us, let me say from the bottom of my heart: thank you.

I never did find out what day Aziz Ansari filmed “Nightclub Comedian.” Even if it was the show I was supposed to be at, I don’t think I’d feel any regret for not going. I got to hang out with my family for the holidays, and that was more special, than, well, a comedy special.

After all this writing about restaurants, I sure am getting hungry. Luckily, me and the fellas have a lunch scheduled. Snow is in the air and on the ground, and life is good.

Luke Mehall is the publisher of The Climbing Zine, and the host of the Dirtbag State of Mind podcast. For more of his work visit climbingzine.com.