Write for your rights 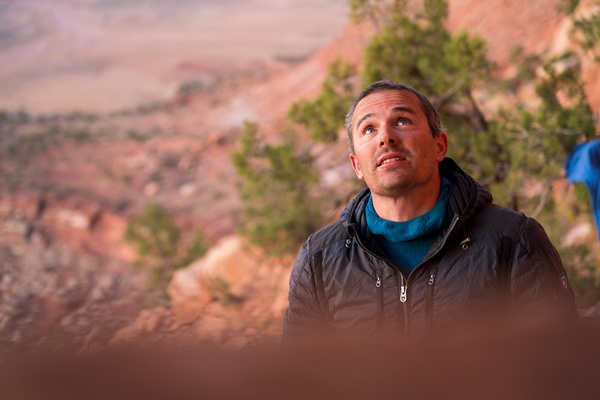 Luke Mehall, contemplating how things are looking up./ Photo by Jake Burchmore

At the end of this week I’m finishing up what has been the most successful book tour of my career. This Fri., Nov. 15, I’m headed down to a place I’ve never been, Bluff, Utah, to present at the Bears Ears Education Center with my friend and fellow climber Josh Ewing.

Like many other independently published writers, I sometimes have had a rough go on book tour. One time I drove seven-plus hours to Fort Collins to present at a bookstore where a whopping three people showed up. Later on that same tour, I went to Longmont where one guy showed up at the brewery where I was supposed to present. I ended up just having a beer with the guy and talking to him.

Those moments seem comical now. At the time, they were heartbreaking. Such is life. We learn from our failures just as much as our successes. And how we react to our failures often defines our careers.

Three years ago, when I began dreaming up this latest book – The Desert – I was in a sort of inner turmoil. Trump had just been elected, and I was angry AF. I was sure that someone with a message like his would never rise to the presidency. Of course, I was wrong.

I’m not sure why I had so much faith in America, but perhaps it’s how and where I was raised. I grew up in Bloomington, Ill., in a diverse neighborhood. I guess at the time I thought that’s what all of the United States were like.

Perhaps Trump only won because he had the perfect candidate to beat. Maybe he won because he really tapped into an America that progressives dismissed. Maybe he energized the fearful white males, and the wives that vote with them, that fear the days of white supremacy are coming to an end.

(Side note: perhaps the only good that will come out of Trump’s presidency is that he made the Clintons go away politically! Could you imagine the political problems that the first, first man Bill Clinton would have caused for Hillary? If you need a refresher on the Clinton era, I highly recommend the “Slow Burn” podcast.)

Alas, all of this is so macro when most of our lives and our potential for impact is micro. My writing will not change anyone’s opinion on politics. For the record, even though I’m a progressive, I am an equal opportunity hater when it comes to politicians. See my previous Hickenlooper pieces on my website. That’s another frustrating thing. We have freedom of speech – shout out to the First Amendment – but I can write, post and share all I want and I’m not going to change one damn opinion.

Let’s think for a minute, though, on the educational process we are all getting on our political system. I mean I think I could name more people from Trump’s original cabinet than I could from Obama’s. (Obama is the only president in my lifetime I ever liked.) Subpoenas, quid pro quo, congressional hearings, executive power, covfefe, etc. I mean we are learning so much.

I also feel like there’s something I’ve learned about the role anger plays in our politics. My anger was at an all-time high when Trump got elected, and it’s been bubbling ever since. And that bubbling pot of anger was an ingredient in my book.

Before Obama left the White House, he created Bears Ears National Monument, which includes my favorite place in the world, the Indian Creek corridor. Obama’s team worked with the Bears Ears Inter-Tribal Council and other recreation groups like the Access Fund and created something remarkable. Then, of course, the Trump administration rescinded the designation, lawsuits were filed, and the issue is being settled in the courts.

During these last three years, this land that was to be proclaimed the Bears Ears National Monument has soothed my soul and brightened my spirits. It’s not just the politics right now, our hyper connected electronic world has made me crave Mother Nature more than ever. My happiest moments these days come when my cell phone stops working, my truck hits a dirt road, and I can focus on my latest climbing project. Sometimes, when my compulsive need to climb is satisfied, simply walking into some canyon and finding evidence of the Ancestral Puebloans is as exciting as climbing. When I find and hear evidence of their own climbing that is absolutely mind blowing.

I think that one of the biggest problems we have in society is getting so overwhelmed by the bad that we forget to do something good. I haven’t even begun to detail all the problems that our country has, some that Trump created, and many that existed before him and will exist after.

It’s the middle of the week now, but my mind is already drifting to the weekend in the desert with my love. I’m excited to check out the Bears Ears Education Center, run by the Friends of Cedar Mesa, and I’m excited to learn more about the landscape that I love that has been cared for by indigenous people for thousands of years. I hope that my own writing can inspire others to care for it, fight for it and protect it. Our souls depend on it, and the soul of America depends on it.