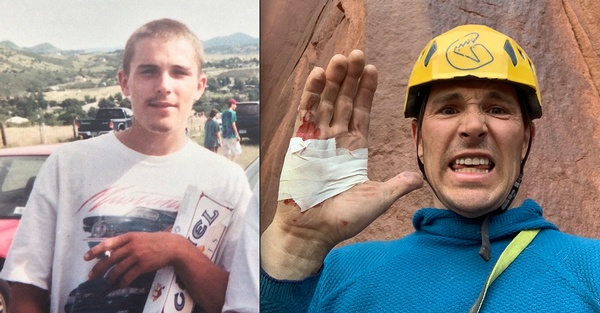 The author 20 years ago, before he found writing and climbing.

When I was first asked by Missy Votel to contribute to this column a decade ago, I was honored. I’d only lived in Durango for a year or so, and I was a hungry young writer. Literally, I was unemployed and barely making ends meet. And metaphorically, I had a deep yearning to become a writer and earn my living that way.

When it came to subject matter, Missy said I could basically write about whatever I wanted. I remember her telling me in a desperate moment she even wrote about SpongeBob Squarepants (whatever that is).

I’ve had my own desperate moments, any writer knows that feeling, but overall, I feel like I’ve always had something to write about. Sometimes the writing has been cathartic, sometimes informative, and at other times I knew I had a good story to tell that the Durango community would enjoy.

After 10 years of pecking away at the keyboard for this column, it’s time for me to step away and give someone else the chance to contribute. I’ve gone from a hungry writer to one that constantly has too many projects on his plate. My cup is full, and I am grateful. If 10-years-ago me could look forward and see where I landed, he would have a big smile on his face.

My writing career started in newspapers. Well, technically, it started with writing poetry on napkins, but there’s no evidence of that. I would get paid $25 – or nothing – and I loved every minute of it.

This was before social media and before we were all so connected to the internet. An age that is hard to comprehend now, even though I lived through it. Was it better? Hard to say. Because I lived through the worst times of my life then, a darkness clouds up my memory.

Writing about my mental health has become central to my work. Probably once a month, I get an email from a young person, usually male and in their early 20s who has read or listened to my memoir, “American Climber,” and they tell me how it helped them work through their own depression or hard times.

“American Climber” was a difficult, yet healing book to write. I wrote about when I was 20 and not sure if I wanted to live anymore. I had no idea what was happening to me, and now I can only describe it as a mental health episode. I am a person who needs daily exercise and the great outdoors to function. At the time, I wasn’t getting much of that, and I was also on a cocktail of substances, some prescribed by doctors for my so-called ADHD, and others like nicotine that I huffed down constantly.

When I moved to Colorado from Illinois during that time period, I was able to ramp up my exercise and time in the outdoors and remove the Dexedrine and nicotine from my intake. And you know what? My mental health vastly improved. Though I’ve had my lows since then – we all do – I’ve never felt like I wanted to die.

It took me 17 years after having those experiences to write about them in “American Climber.” At first, I was a little nervous to write it out. I was worried about what Mom would think, but it turns out the scary climbing situations frightened her more than my depression and dark thoughts. I remember her texting me while reading the book, saying she had to take breaks whenever I wrote about a near-death experience while climbing. (I’ve had a few, that’s the hard truth. Sometimes when you decide you have the will to live, something else will come along and try to kill you).

Though I thought I’d forever conquered my depression, during the last couple pandemic years, it resurfaced. I know I’m not alone. In some ways, I’m grateful, because it finally led me to therapy, which I’ve really enjoyed over the last six months. I’m grateful I found a therapist who shares my values and love of the outdoors. As I rebuild my life from all the lows of the past two years, a lot of what we talk about is my 20-year-old self, what he went through, and how that still affects me and my relationships today.

Writing and storytelling have changed so much in the last decade. I’m grateful I’ve been able to have an impact through my art. As time goes by, I’m realizing I need to scale my work as much as I can, so I can reach as many people as possible. We are living in difficult times, and as a writer opening up about my own pain and experiences, it can really help other people going through the same thing.

Writing this column for the past 10 years has helped me reach a lot of people. I truly feel at home in Durango, and I’m grateful for the opportunity to share my thoughts, stories, opinions and perspectives in this column.

As a child of the hip-hop generation, my vision and goals are major; as big as El Capitan and as expansive as the cliffs of Indian Creek. Let’s see what we can do in these next 10 years! Thanks for reading.

Luke Mehall is the author of five books, host of the Dirtbag State of Mind podcast, publisher of The Climbing Zine, and president of the Durango Climbers Coalition. This summer he will release his first ever mixtape. And yes, there will be a party. More work can be found at climbingzine.com.