Rage is all the rage these days. And rage will get you places; look no further than the President of the United States. Ah, but of course we can’t start there. Too easy. But we’ll get there. I’ll take some swings at President Agent Orange, for sure, just like he did with that golf ball that he hit Hillary with on Twitter.

I for one admire outrage at the most miniscule levels. For example, I really appreciate rage at punctuation. Or proper spelling. Things like that. Tiny things, that matter to the educated American.

I should also admit that I’m having a hard time directing my rage these days. Currently the only way I have to express my rage is my middle finger. When I’m driving around town, I have that bad boy cocked and ready. Ready for what? A Confederate flag. Not an actual Confederate flag, but one of those license-plate-holder Confederate flags.

Usually these Confederate license plates are on big trucks so they don’t see me honking and flipping them off. Another lost opportunity, but honestly it’s probably a good thing, I don’t want to fight. I may be angry, but deep down inside I’m just another peace-loving hippie.

I’d planned to make this whole article a rant about rage and about the small things in life. But then, something big (and small) happened: documents on Secretary of the Interior Ryan Zinke’s recommendations to shrink 10 national monuments were leaked to the Wall Street Journal and the Washington Post.

The monument that contains my favorite place in the world, Indian Creek, part of Bear’s Ears National Monument, will be reduced by 90 percent. That’s a whole lot of shrinkage.

Up until now, we’ve played nice. But nice doesn’t really work with these people. So I’m going to pull a card from the Trump playbook. 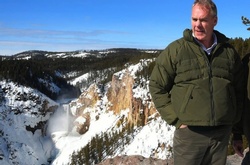 Never, ever, ever (forever-ever) forget Trump’s rise to political power came from something he insisted on for years before his presidency: The Birther Conspiracy, that Obama was not born in the United States. Or what he said about Sen. John McCain, a former prison of war, “I like people who weren’t captured.” Or what he does to women, “I just grab them by the pussy.”

So here we go: #zinkesgotshrinkage.

Yes, coming at President Trump where it hurts: talking about size. It matters to him. He brought up his penis size during the debates last year (I wish that was fake news) and he hated it when his inauguration crowd was smaller than Obama’s.

This is the theory: because Zinke greatly suffers from shrinkage (see the “Seinfeld” episode for reference if you don’t know what I’m talking about) he is forcing the rest of the country to see how it feels by shrinking our national monuments. Yes, shrinkage is a thing, and it happens to ole “Shrinkage Zinke” every time a small breeze passes by. He goes to the bathroom on a cold winter day and he can’t even find the damn thing.

More evidence: remember the video when he was visiting Bear’s Ears and an activist was asking him questions, and he snapped at her, shaking his finger and shouting violently, “be nice?”

Well, he was outside on a cold spring day. He was moody and upset. “Why aren’t these people interested in oil and gas in sacred places?” he wondered. “And where did my pee pee go, will it ever come back?” Poor guy was worried about wetting his pants on a horse. You can’t blame him for getting testy (sorry).

‘Ole Zinke rides a horse to work acting like he’s Teddy Roosevelt, but in reality he’s more like George Costanza, a weak little man who is afraid to be seen naked. Oh, Trump’s gonna hate hearing that. He’s going to be more of an embarrassment than Sean Spicer and Anthony Scaramucci combined, and we all know that Trump hates to be embarrassed.

Never fear, Zinke, in the spirit of bi-partisanship (I hear that’s all the rage this month) I’m going to drop you some game. Instead of shrinking, start building. Your job as the head of the Interior Department is to protect our public lands. Show us that you can overcome shrinkage! Visit Death Valley National Park, I hear its warm there.

Change your recommendations to Trump. Tell him in order for the country to think that you are well-endowed men, you must keep these national monuments intact. Start increasing the size of national parks and monuments, doesn’t that sound better? Instead of “Shrinkage Zinke” we could call you “Trying Ryan” or “Secretary Size.”

Look, your hero Teddy Roosevelt wasn’t all that great. Sure he protected public lands, but he also aided in lands being taken away from Native Americans. He was a racist and a warmonger.

And while we’re talking about Teddy, grow a mustache why don’t you? That’s the only reason Teddy has a positive legacy, he had a nice ’stache. Grow a mustache, keep our public lands public and protected, and show your boss that you can do your job, just like a big boy (pun intended)! I promise that will help with, ahem, that “little” problem of yours.

Mehall is the author of four books including American Climber and founder of the #zinkesgotshrikage hashtag. More of his work can be read at lukemehall.com and climbingzine.com.