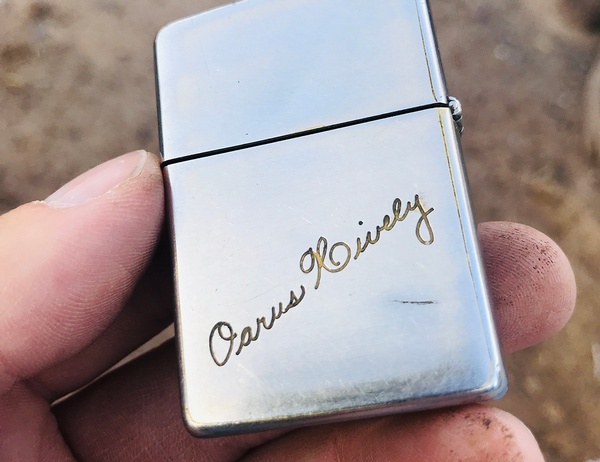 I thought I didn’t want much for Christmas until I got it: a great big pocket-sized validation of my manliness and manhood.

It came, as masculinity and virility often do, wrapped in tissue paper. My aunt mailed it along with a Christmas card that promised “some fun memory items for your little house on the prairie.” I’ll admit I retracted a bit upon reading that, out of concern not for the diminutive phrasing for my home (which has nothing to prove, by the way), but for the literary reference.

I’m man enough to admit I never read “Little House on the Prairie.” I read Nancy Drew books instead. Who didn’t? She was basically like both Hardy Boys in one person with a fast blue car. But “Little House on the Prairie,” like all its sister books by Jane Austen, was never the librarian’s recommendation for a growing young man like me. Besides, I’ve seen the movie and have no desire to relive the scene where Amy burns Jo’s book.

That horrible moment might be what my aunt alluded to in her note. For inside the tissue paper was a collection of my grandpa’s artifacts, prized among them Papaw’s Zippo lighter with his name etched on the side. Perfect for setting flame to all my worst work – and sealing rope ends, and lighting pipes, and lighting scented candles, and maybe some incense, too.

I used to think manliness was created by mere acts of manliness, like stopping to fix a stranger’s flat tire or my monthly chin-up. Now I know better – manliness is tangible, like the Swiss army knife I haven’t seen anywhere around here for a couple months now. Or like the worn brass plating on this exquisite hinged rectangle, that musical clink when I thumb it open, that charming clunk when I flip it shut. Sure, the lighter’s lid doesn’t stay precisely shut anymore, and it’s not throwing sparks, and the wick is probably asbestos. But it’s great in a survival situation if it works right, and more than that, it was Papaw’s. He was a real man – a good man – for at least as long as he carried this lighter.

And now it is with me.

Words can’t describe the shift in my being with this tool in my hand, but I will use them anyway: I feel capable. I feel cool. I feel like part of my Greater Purpose on This Earth is to restore this lighter to service, and whatever comes after will simply be me completing my missions and setting the world to rights.

First things first, however: I needed to learn how a Zippo lighter works.

It turns out this is easier than finding out how a typewriter works or a semi-truck engine, because there are a LOT of Zippos in the world. Like, they still make 70,000 a day somewhere in Pennsylvania, despite the existence of 70 years’ worth of Zippos. And most of these are bought up by the people who make videos about Zippos for a living, to be watched by the other people who make videos about Zippos, despite the fact that Zippo technology turns out to be as sophisticated as nail clippers.

Seriously – you put some highly flammable fluid in the insert, which is soaked up by custom-made felt pads or else by cotton balls like you Little Housers use to remove cosmetics. The wick – which actually was asbestos – wicks the fluid to the top. If you flick the wheel before all the lighter fluid evaporates into the atmosphere, it doesn’t do anything, because it turns out Papaw’s flint insert disintegrated sometime in the last three decades, so there are no sparks, and I’m left making another run to the smoke shop.

But that’s OK! Because when you have found your Greater Purpose as a man, running to the store for supplies is not an inconvenience. It’s a chance that someone different will be working the register and you can show off your Christmas present one more time to someone who will listen, because they are getting paid to be there. It’s a chance that a person will have a flat tire along the way, and all they need to fix it is a manly man, and I can call one for them. It’s a chance that one of these people, maybe, just maybe, knows where the heck I put my knife.